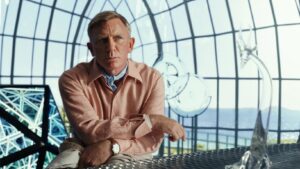 It’s nice to see Daniel Craig carving out a successful post-Bond career, as Sean Connery did. In “Glass Onion,” Craig reprises his detective character, Benoit Blanc (complete with the accent you can’t place), from the mega-hit “Knives Out.”

There’s little reason for me to explain the plot, with all its twists and turns. Suffice to say that in the end — in the drawing room whodunit tradition — Blanc gathers everyone together to explain the minutia of the crime, and we get flashbacks revealing things we didn’t see (or notice) when they happened in real time.

There are also several scenes that serve no purpose but to allow the cast to chew some scenery or, in the case of Hudson and Bautista, show off their bodies. There are two woefully underwritten female characters, played by Jessica Henwick and Madelyn Cline, who are just along for the ride, adding nothing to the goings-on. As for Norton, he can play narcissistic rich guys as well as anyone, but some of his actions seem lifted right out of the character he played in “The Italian Job.”

Those criticisms aside, “Glass Onion” contains at least six fun celebrity cameos, Rick Heinrichs’ production design of Norton’s palatial estate is breathtaking, and Monáe proves yet again what a wonderful actor she is. Writer/director Rian Johnson certainly knows all the rules of this genre and doesn’t mind bending them in service of his story. Both he and his leading man are committed to one more movie in the series, but I’d be surprised if Netflix doesn’t try to convince them to continue beyond that.

There’s some debate about Netflix’s release strategy for “Glass Onion.” It opened Friday for a single week in theaters, then will disappear before it begins streaming on December 23rd. Though Netflix doesn’t release box office figures, estimates say it made $15-18 million over Thanksgiving weekend across 600 screens. That’s pretty good, and makes one wonder why it’s getting such short shrift theatrically. I’ll leave that for the industry analysts to figure out, but I don’t think it matters much whether you see it on a big screen or in your living room.

“Glass Onion” isn’t a great movie, but it provides enough fun for me to give it a 7 out of 10.

By the way, when my wife and I went to see “Glass Onion” the other day, we couldn’t believe we were forced to sit through trailers for seven other movies. Not only that, but they all looked terrible. I seriously doubt I’ll ever see a single one of them — although the trailers give away so much I feel as if I already have.