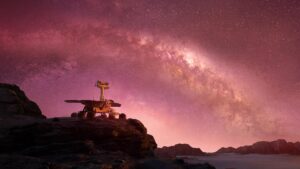 In 2003, NASA launched two rovers — Spirit and Opportunity — to the surface of Mars. The mission was supposed to last 90 days. Instead, it went on for years.

Ryan White’s documentary “Good Night Oppy” tells the story of the people behind that scientific and engineering achievement. They had to create brand new hardware and software. They had to control devices so far away that the signal could take ten minutes each way. Imagine hitting the brakes on your car and not having it stop (or even slow down) for that long.

White (“The Case Against 8,” “Ask Dr. Ruth“) uses footage of the engineers, scientists, rover drivers, geologists, and rocket scientists telling their own story from the very beginning of the missions to the very end. He includes the scene on January 4, 2004, when the entire team at JPL gathered to wait nervously for some sign that — after six months traveling through space — Spirit had landed safely on the red planet. The looks of relief and joy at the first photos coming in to the room from the rover’s camera are infectious.

Three weeks later, the process was repeated when Opportunity bounced onto the surface on the other side of Mars. Where previous attempts had failed, this NASA/JPL team had pulled it off. Twice.

White wisely focuses not only on the machinery, but on the personnel, who had to adjust their body clocks because each Martian day (which they call a Sol) is 40 minutes longer than an Earth day. To stay on the same schedule as the rovers, everyone at mission control had to acclimate to an environment where a daily meeting at noon turned into a nightly meeting at midnight a month later.

We also get to hear the “wakeup songs” sent to the rovers to start each day, including “Here Comes The Sun” and “Wake Me Up Before You Go Go.” My favorite was when one of the rovers had been shut down due to a massive dust storm and wasn’t responding to commands from the control room. Everyone felt down, worried they’d lost contact with it forever. Then one of the supervisors chose the song “SOS” by Abba, which not only put smiles on the human faces, but seemed to kickstart the rover, which awakened and went back to work.

Because there was no one there to capture shots of the rovers moving about the surface, there’s some well-done animation to give viewers the sense of being there. I didn’t mind that, since I understand the need to make the images more palatable to the audience. However, I didn’t like the use of swooshing sounds to accompany scenes of the crafts flying through space — where there is no sound. But that’s a minor nitpick.

At 105 minutes long, “Good Night Oppy” is just the right length. It’s well-paced, told in both real time and retrospect by the people who did it (with some voiceovers by Angela Bassett), and a prime example of what human ingenuity can accomplish. It may also inspire some young people to enter the field and create the new technology we’ll need to keep exploring our solar system and beyond.

“Good Night Oppy” is one of the best documentaries of the year. I give it a 9 out of 10.

Opens in theaters Friday and streaming on Prime Video November 23.