Review: “If These Walls Could Sing” 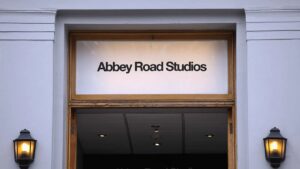 In 1988, I had the honor of broadcasting my morning radio show (on WCXR/Washington) from the legendary Abbey Road studios.

Knowing some of the history of the place, it was exciting and daunting to walk into the building and through hallways covered with photos, gold and platinum albums, and other memorabilia from the performers who had recorded there.

My newsman, John Ogle, and I were guided to Studio 2, where we sat at a long table and looked around. There were no instruments or audio equipment in the room, just some microphones and headphones, surrounded by walls of acoustic baffling on wheels rolled in to reduce the echo of the huge empty space, which was two stories tall.

Looking up into a corner, I saw the window to the control room, where engineers and producers played their part in the creative process. That was where George Martin and Geoff Emerick added their magic to what the Beatles did on the very floor I was standing on. I don’t remember the name of the engineer who was on duty when I was there, but he agreed to come downstairs and chat on the air for awhile, sharing stories about the facility’s history and projects he’d worked on more recently.

The promotion company that arranged this unique opportunity had invited some London-based classic rockers to join us. One of them was an old friend of John’s, Colin Blunstone, lead singer of The Zombies. The others included Denny Laine (Moody Blues and Wings), Gary Brooker (Procul Harum), and Bob Geldof (just two years after he’d arranged the Live Aid concerts).

I thought about all of this while watching “If These Walls Could Sing,” Mary McCartney’s documentary about the venue and the people who recorded there. Of course, that includes her father Paul, as well as Ringo Starr (who admits it was Paul who got The Beatles back to work in the studio, a fact that became evident in Peter Jackson’s “Get Back” series). There’s also archival footage of George Martin and contemporary interviews with his son Giles, who has taken his late father’s place as master audio archivist for all things Beatles.

But it’s not all about the Fab Four. Shirley Bassey talks about singing the iconic theme song to “Goldfinger.” Cliff Richard remembers his years as one of the UK’s most successful pop stars. Jimmy Page and Elton John remember their first gigs Abbey Road as session musicians. George Martin recalls his frustration when Burt Bacharach forced Cilla Black to do fifteen takes of the theme song to “Alfie,” even though George told him that the fourth take was perfect.

Roger Waters, David Gilmour, and Nick Mason reminisce about making the first Pink Floyd album at the same time The Beatles were making “Sgt. Pepper” in the other studio. Like me, the experience of walking into Abbey Road for the first time has stayed with Liam & Noel Gallagher from Oasis. One of them says as he walks through the halls, “Most of my record collection was recorded here. My haircut came from here, too!”

John Williams recorded his soundtracks for “Raiders Of The Lost Ark” and “Return Of The Jedi” with a full orchestra in Studio 2, which he claims had its own unique sound — something I noticed, as well. It wasn’t completely noiseless, as I’d imagined a recording studio had to be. Rather it had sort of a warm hum, not electrical, but not totally silent, either. As if the paint and draperies were awed by what they’d witnessed, too.

If I were a betting man (and it turns out I am), I’d wager that every person I’ve mentioned here — not to mention millions of tourists — stopped to have their photo taken crossing the street in the iconic zebra crossing outside Abbey Road. When John and I did it that day in 1988, we were stunned there was no stop sign or traffic light. My wife and daughter and I went back 18 years later, and there was still nothing controlling traffic — nor is there today! — while music fans strike that oh-so-familiar pose in that oh-so-familiar place.

“If These Walls Could Sing” is now streaming on Disney+.