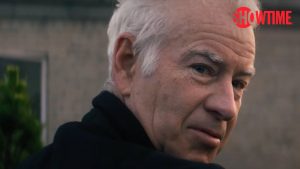 This Showtime documentary was timed nicely to debut in the middle of the US Open, where John McEnroe still reigns as one of tennis’ best TV analysts.

The game has changed a lot since his days as a wooden racket-wielding bad boy of the court, but so has McEnroe. In his twenties, he had a hair trigger temper, smashed rackets, and yelled at chair umpires. McEnroe was known as the Super Brat at Wimbledon, where he was booed regularly. He says in the doc that he learned from Jimmy Connors’ arrogance that you’ve “gotta be a prick out there.” He also served and volleyed his way to become the number one men’s tennis player for four consecutive years.

Now he’s become more of a statesman, with his most controversial comments being about why Novak Djokovic should have been allowed to play in the tournament. He’s very open about many things in his past, including his marriage to Tatum O’Neal, which fell apart amidst her drug abuse. But several other members of McEnroe’s family appear, including his father, his brothers, and current wife (and ex-singer with the rock band Scandal) Patty Smyth, who says “I married a bad boy who turned out to be a good man.”

The best parts of “McEnroe” are the segments that focus on his matches against rivals like Ilie Nastase, Vitas Gerulaitis (who took him to Studio 54 after they played in the US Open), and Björn Borg (whose match in the finals at Wimbledon in 1980 would best be described as Volatile vs. Calm).

The problem with Barney Douglas’ film is that he tries to add unnecessary artsy touches, like following McEnroe from behind as he walks at night through the Long Island town he grew up in. There are weird Tron-like graphics, and lots of stock footage of the Manhattan skyline. He doesn’t break any ground that wasn’t already covered in the fictionalized “Borg vs. McEnroe,” which came out five years ago. Douglas also doesn’t delve into what McEnroe is up to these days other than his work for ESPN at the four grand slams.

Because it offers little new information, “McEnroe” is like a B-grade episode of “30 For 30.” If you don’t know the highs and lows of his story, you might learn something, but not a lot.