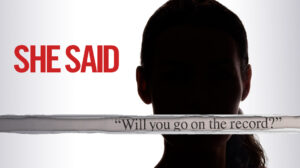 “She Said” is the story of how New York Times investigative reporters Jodi Kantor (Zoe Kazan) and Megan Twohey (Carey Mulligan) broke the story of Harvey Weinstein’s sexual assaults against up-and-coming actresses and women who worked for him at Miramax.

The challenge for Kantor and Twohey was to get the victims to come forward and tell their stories. Those attempts are recreated in painful detail as we learn how Weinstein abused trust for his own sexual satisfaction. None of the assaults are depicted on screen — only the women telling their stories, the impact it had on their lives, and how the people around Weinstein enabled his disgusting actions. Many of them never reported the crimes to police (or anyone) for fear of revenge from one of the most powerful men in show business.

The scenes of the reporters traveling far and wide to try to connect to the victims face-to-face are compassionately done, and there’s one heartbreaking scene in which director Maria Schrader uses actual audio of Weinstein trying to convince a victim to come out of a hotel hallway into his room. Throughout most of “She Said,” Weinstein is never seen on screen, and when he is, it’s only from behind as a hulking presence.

Schrader and screenwriter Rebecca Lenkiewicz do an excellent job of revealing not only the difficulties Twohey and Kantor faced in investigating the story — while under pressure from Weinstein, his attorneys, and his acolytes — but also the impact it had on the journalists’ lives as the mothers of very young children. Every single member of the “She Said” cast is perfect, especially Mulligan and Kazan, who portray the professional, personal, and emotional demands Twohey and Kantor faced while working the story.

There’s also a brave appearance by Ashley Judd, who plays herself as one of Weinstein’s victims who came forward and allowed her name to be used because he had effectively black-balled her from the business. Jennifer Ehle and Samantha Morton also appear as women who suffered physical and emotional abuse by Weinstein but were scared to tell their truths, while Gwyneth Paltrow and Rose McGowan are heard in phone calls, their voices performed by other actresses. Because their allegations were coming out at the same time two dozen other women were accusing Donald Trump of similar crimes, the then-candidate’s voice is heard in soundbites performed by “Saturday Night Live” regular James Austin Johnson, whose imitation is so much better than Alec Baldwin’s cartoonish take.

“She Said” does include a few standard newspaper movie tropes, including plenty of scenes in which the reporters and their editor Rebecca Corbett (Patricia Clarkson) meet to try to figure out how to get witnesses and victims to go on the record. While there’s no shot of newspapers whirling through the printing presses (in fact, I don’t think we even see a newspaper at any point), there are the obligatory “You don’t have it yet” scenes on the way to finally clicking the Publish button. There’s also a very satisfying scene in which, during a phone call with Weinstein, managing editor Dean Baquet (Andre Braugher) has had enough from the showbiz bully and tells him so.

The film ends with on-screen text explaining that Weinstein was eventually convicted and sentenced to 23 years in prison, which he is now serving. But his legal troubles are far from over. The release of “She Said” coincides with another criminal case being litigated in a Los Angeles courtroom this week, based on charges against him by eleven other women, including Jennifer Siebel Newsom, wife of California governor Gavin Newsom.

“She Said” is a wholly satisfying reproduction of an important moment in our cultural history, at the launch of the #MeToo movement, which helped expose similar horrendous acts done by men in Hollywood and too many other places. Sadly, it remains just as relevant today.

I give “She Said” a 9 out of 10. It stands in the pantheon of great newspaper movies alongside “Spotlight” and “All The President’s Men,” and will certainly have a spot on my Best Movies Of 2022 list next month.