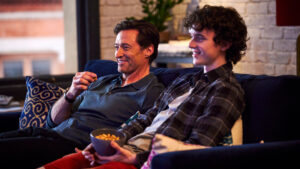 Two years ago, I named Florian Zeller’s “The Father” one of the Best Movies Of 2021 (read that review here). Anthony Hopkins won an Oscar for playing a man afflicted with Alzheimer’s, and the story also demonstrated the impact the disease had on those close to him.

Now Zeller is back with another family drama, “The Son,” starring Hugh Jackman as Peter, a divorced man living with his new partner Beth (Vanessa Kirby) and their infant son. When Peter’s ex-wife Kate (Laura Dern) calls to report a problem with their teen son Nicholas (Zen McGrath), things start to fall apart. Nicholas is a very troubled boy who’s been skipping school, cutting himself, and lying about his whereabouts. When confronted, he says he’s in pain, but can’t explain what’s causing it or why he feels that way.

Sometimes it’s fun when a movie’s audience knows more about what’s going on than the characters on screen. It can make drama more intense and comedy funnier. But there are times when we can’t believe that the people we’re watching don’t recognize what’s obviously going on. Like if someone walked around with an extra arm jutting out of their chest and nobody said anything.

Thus it’s off-putting that none of the adults around him recognize that Nicholas is clinically depressed. In fact, no one comes to that conclusion until very late in the movie — and even then, that person is a medical professional, not his father, mother, or stepmother, who are all in denial.

Unfortunately, that’s all “The Son” has to offer, a central conceit that is played out over and over again. Look at how Nicholas’ behavior is impacting Peter’s very busy life. Look how unpleasant it is for Beth to be around Nicholas. Look at Anthony Hopkins (yes, again) in just one scene in which we learn he was a lousy father to Peter. Look at Laura Dern acting the way Laura Dern always acts regardless of role.

It all builds to a climax I knew was coming an hour before it happened. Along the way, I can’t fault any of the cast for anything they did wrong, but watching them feels like observing people hurt in a car crash before the paramedics show up. There’s injury and angst and yelling, but nothing that makes us care about any of them. Zeller hit a home run with Alzheimer’s, but he’s struck out with clinical depression.

I give “The Son” a 2 out of 10. It is not exactly the feel-good hit of the year. Opens tomorrow in theaters.