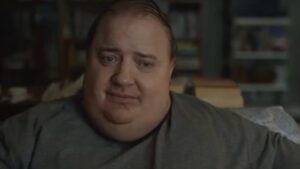 All of those actors not only put in strong performances in those movies, they also changed their looks dramatically, either through prosthetics or (in De Niro’s case) pasta. The result: Academy Awards.

There’s similar buzz this year for “The Whale” star Brendan Fraser, who plays Charlie, a 600-pound English teacher who conducts his classes over Zoom, but keeps his camera off because he doesn’t want his students to see him. Charlie is morbidly obese, grieving, depressed, and one heart attack away from dying — which he’s trying to bring on by consuming two pizzas a night plus all sorts of other high-calorie foods.

He’s estranged from his wife, Mary (Samantha Morton), and hasn’t seen his 17-year-old daughter Ellie (Sadie Sink, from “Stranger Things”) for several years, but desperately wants to reconnect with her. When Ellie finally shows up at his house, she’s an entirely unlikable girl full of abrasive attitude and disapproval, but Charlie considers everything about her “amazing,” a word he repeats several times despite all evidence to the contrary.

Charlie is visited regularly by his friend Liz (Hong Chau), a nurse who has some connection with him we’re not sure of until halfway through the plot. She checks up on him, takes his vitals, and encourages him to change the suicidal path he’s on. One day, a missionary named Timothy (Ty Simpkins) knocks on the door and gains entry in an attempt to save Charlie’s soul with religious nonsense. Charlie’s not interested, but doesn’t shoo this interloper away. Instead, they form an unusual bond, despite warnings from Ellie, who sees right through the missionary’s efforts.

Through it all — chest pains, wheezing, an uninvited guest, a snarling daughter — Charlie never shows any anger. He’s nice to everyone, often overly so, and Fraser makes the character even more sympathetic with a cherubic look under all that makeup. It’s not an Oscar-level performance, but might spark a career comeback for the actor who was famous in the 1990s for the “Mummy” movies and not much since.

I find it interesting none of the hype about Fraser ever mentions “The Scout,” the 1994 Michael Ritchie movie in which he played a baseball phenom discovered by Albert Brooks’ character, a disgraced major league scout. Brooks carried the movie, pulling Fraser along through a story that fell  apart in its last third. But I could draw a straight line from the naïveté of that character to the unassuming Charlie in this one.

However, the best performance in “The Whale” is by Chau, who plays Liz with a mixture of concern and contempt for what Charlie’s doing to himself. Chau is having quite a movie season, as she’s also one of the best parts of last month’s “The Menu” (which I reviewed here), and I’d like to see her recognized with a supporting actress nod for one or the other.

I was hesitant to see “The Whale” because it was directed by Darren Aronofsky, whose last project, “Mother,” was bad enough to earn a place on my Worst Movies Of 2017 list. This one’s better, but because it takes place almost entirely in one room, “The Whale” has a stuffiness to it, probably leftover from the Samuel D. Hunter play it’s based on. Nothing Aronofsky does cinematically overcomes that, so we’re stuck in a sad movie about an XXXXXL man which, in the end, comes off as nothing more than Oscar bait.