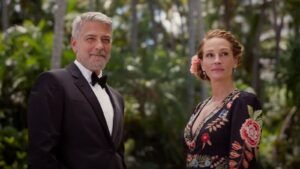 Sometimes, whether you like a movie depends entirely on who stars in it. “Ticket To Paradise” is a perfect example. Julia Roberts and George Clooney clearly had a ball making it, even though they didn’t have to stretch their acting muscles one bit.

They play Georgia and David, a couple who went through a bitter divorce 20 years ago, but find themselves back together for the law school graduation of their daughter Lily (Kaitlyn Dever), and instantly fall back into the same unpleasantness that drove them apart. The next day, Lily and her roommate Wren (played by Billie Lourd, daughter of Carrie Fisher, granddaughter of Debbie Reynolds) depart for vacation in Bali, where Lily falls hard for a good-looking young seaweed farmer, Gede.

A month later, to the horror of her parents, Lily and Gede are getting married, so Georgia and David fly to Bali to stop the wedding any way they can. From here on out, with its beautiful people in a beautiful location, “Ticket To Paradise” checks almost every box on the romcom formula list, leaving no doubt about where it’s headed.

Roberts still has that same beautiful, broad smile she did decades ago when she made her debut in “Mystic Pizza.” Meanwhile, Clooney has matured into a handsome, middle-aged master of the double take. They have a natural chemistry, even when their characters are sniping at each other.

Too bad they’re caught in a movie with such a thin, predictable script. When someone says, “I am not going to kiss you,” about three seconds go by before she kisses him. When one character says, “This is known as snake cave,” you know somebody is about to be bitten by a snake and hilarity will ensue. When Lily urges her parents not to make drunken fools of themselves dancing around in front of a crowd, they do exactly that.

Unfortunately, Dever — who had a run of great performances in “Booksmart,” “Unbelievable,” and “Dopesick” — is given very little to do with a role that could have been played by any of her contemporaries, from Zoey Deutch to Chloë Grace Moretz to Kathryn Newton. The same could be said of Lourd, who is stuck with a stereotypical gal-pal character. In fact, if the two actresses switched roles, it would have absolutely no impact on the movie.

Speaking of thankless parts, let’s not forget Paul (Lucas Bravo), Georgia’s airline pilot boyfriend, who is destined to be swept aside before all is said and done. Meanwhile, all of the Balinese characters have the depth of stick figures and serve as mere window dressing as the story plays out around them. And there’s a woman who’s stuck between Clooney and Roberts on the plane to Bali, played by Geneviève Lemon, who does the best imitation of Edie McClurg I’ve ever seen.

Writer/director Ol Parker’s resumé includes writing the “Exotic Marigold Hotel” movies and directing the “Mamma Mia” sequel, so he clearly knows how to move the pieces around so they don’t get in the way of his big-name stars. I’m not sure he ever had to give his cinematographer any direction other than, “Point the camera at Julia and George.”

That’s not enough to put “Ticket To Paradise” at the same level of Roberts’ romcom successes of the 1990s (“Notting Hill,” “Pretty Woman,” “My Best Friend’s Wedding”), but it passes for exactly what it is — a run-of-the-mill romp. It even includes outtakes over the end credits to show you how much fun everybody had in such an idyllic locale. I just wish I’d felt some of that same joy while watching them.

I give “Ticket To Paradise” a 5 out of 10. Opens today in theaters.