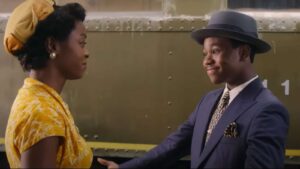 The murder of 14-year-old Emmett Till in 1955 caught the attention of the nation, and became one of the linchpins of the burgeoning civil rights movement. Writer/director Chinonye Chukwu has made a very effective reminder of that moment in history, which is sadly not taught to the vast majority of Americans born in the interim.

She does it by focusing “Till” on Emmett’s mother, Mamie, who raised her son in Chicago and was leery of him going to a small sharecropping town in Mississippi to spend time with his cousins. She knew that Jim Crow culture was markedly different from what he was used to, and sternly warned him to watch what he said and did in the presence of white people. Chukwu gives us a bit of foreshadowing when he and the other Black passengers get up from their seats and move to the rear of the train as it crosses the Mason-Dixon line. Seconds later, it pulls out of a tunnel and the bright sunlight turns the entire screen white, a visual cue akin to Dorothy’s first view of Oz.

But Bo, the nickname Mamie and her relatives used for Emmett, couldn’t grasp the seriousness of the situation. When he dared talk to Carolyn Bryant, the white owner of a neighborhood store, and complimented her looks — complete with a wolf whistle — his cousins and uncle “Preacher” knew it was trouble. They hustled him out of there before she could get her gun, but that was hardly the end of the matter. Three nights later, Bryant’s husband and an accomplice showed up at Preacher’s house and dragged Bo away at gunpoint. He was found later in the river, bloated by the water, having been beaten severely and shot in the head.

When Mamie heard the horrible news, she wanted Bo’s death to be more than yet-another-racist-murder in Mississippi. She demanded his corpse be transported back to Chicago, where she insisted on an open coffin so people could see what had been done to her boy. Thousands of people lined up for the viewing, and the national press picked up the story, which at first was only being reported in Black newspapers.

Mamie did not shrink from the spotlight, telling any outlet that would listen the story of her son’s murder. With the help of the NAACP and others, she even went to Mississippi to testify in the case against Bo’s killers — despite knowing that no jury of twelve white men would convict two other white men of murdering a Black teen.

The best part of that courtroom scene is when Mamie is on the witness stand and the camera never cuts away from her to show the prosecutor or defense attorney. Instead, we’re pulled in by the words and pain in the face of a mother who has lost her only son. Chukwu also made a good decision not to include scenes of Emmett being brutalized and killed — though we do get to see the results as Mamie first views his lifeless body upon its return to Chicago.

I wasn’t familiar with Danielle Deadwyler, who gives nothing short of a brilliant performance as Mamie. She’s an actress to keep an eye on. Jalyn Hall plays Emmett with just the right mix of braggadocio and naïveté, and there are good supporting turns by Frankie Faison, Sean Patrick Thomas, Whoopi Goldberg as Mamie’s mother, and Haley Bennett as Carolyn Bryant, the accuser, who lied about the circumstances that started the whole thing.

Kudos also go to production designer Curt Beech, costume designer Marci Rodgers, and cinematographer Bobby Bukowski for the rich colors and settings of “Till,” which enhance the storytelling dramatically.

Three years ago, Chukwu impressed me as writer/director of “Clemency,” an under-seen movie starring Alfre Woodard in a captivating performance about the warden of a prison who has to oversee the executions of inmates given the death penalty. I gave “Clemency” an 8 out of 10 (my full review is here).

Chukwu has provided us with more than just a history lesson. She’s given us a reminder to never let the echoes of our ugly past fade away. It coincides with the passing of the long-overdue Emmett Till Anti-Lynching Act, signed earlier this year by President Biden.