In 2000, Rick Ankiel was a 21-year-old pitching phenom for the St. Louis Cardinals who had been compared to Bob Gibson and Sandy Koufax. But that changed on October 3, when he was pitching in the first game of the National League division series. He threw a wild pitch that hit the backstop. Then he did it again. And again. And again. And again. In five pitches, his world came crumbling down as he was affected by a condition that athletes call The Yips.

Over the course of the next few years, Ankiel went back down to the minors, then returned to the majors for a couple of years, then retired — until the Cards offered him a chance to come back yet again, this time as an outfielder. Remarkably, he was able to work his way back up from the minors for a third time and spent several more years with the Cardinals, Royals, Mets, Astros, and Nationals, before retiring for good in 2013. 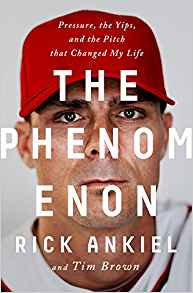 Ankiel writes about all of this in “The Phenomenon: Pressure, The Yips, And The Pitch That Changed My Life.” When he joined me in the studio, I asked him: