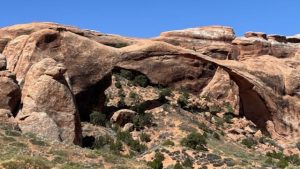 On Friday, I wrote about being surprised by the strong winds we encountered while visiting Arches and Canyonlands National Parks for the first time. It didn’t ruin the trip because we were so awed by our surroundings, but I thought I’d write a bit more about what we observed in those two astoundingly beautiful locales.

At Arches, we stopped and parked frequently along the 18-mile scenic road and hiked to eight or nine arches — including Delicate Arch, the one on Utah’s license plate — but there were many more we didn’t get to during our six-hour stay. The sandstone rock formations consist of striations of brown, red, gold, and gray. Interestingly, one of them, Mesa Arch, looked more like petrified wood up close.

Some hikes were more strenuous because of hills or sand dunes, but the weather was perfect. In addition to the views at eye level, we kept reminding each other to look up, too, because puffy white clouds against the perfect blue sky enhanced the aesthetics. We also tried to remember to drink lots of water and not overdo it on the hikes, considering the altitude of the parks ranges from 6,000 to 7,800 feet.

Because we arrived at 7am to beat the crowds (with a timed entry ticket I’d reserved two months in advance, along with my National Park Service Seniors Lifetime pass), we never had to deal with crowds on the paths or in the parking lots. In fact, when we arrived, there were only five or six cars ahead of us in the queue. But when we left at 1pm, the line of vehicles waiting to enter was backed up all the way onto the nearby highway.

Of the people we did pass, everyone was in a good mood. Surprisingly, considering all the photos being taken, we spotted only one selfie stick, but lots and lots of walking sticks. It occurred to me at one point that we had not seen a single person smoking, and there were no discarded cigarette butts on the trails. Maybe walking around outside for a long time is not the kind of activity a two-pack-a-day (or even casual) smoker undertakes.

The next day, we visited Canyonlands, which fully lives up to its name, too. Each time we got to an overlook, we walked around the rim to see things from different perspectives, a trick we learned years ago while visiting the Grand Canyon. As at that park, the Park Service has built cairns to mark the trails, but installed no guardrails around the rims, so you’re on your own when it comes to how close you want to get to the edges.

In fact, the only warning signs we spotted at either of the parks merely cautioned visitors to stay off the arches and on the trails. And there was this one, too:

At Canyonlands, we attended a short geology talk given by an NPS Ranger at Grand View Point (6,270 feet). Unfortunately, she kept asking questions that made me feel like I’d shown up to the first day of class without doing the assigned reading and discovered the teacher was conducting an oral pop quiz. Most of what she explained was rather bland, but I took particular note of her description of how different that landscape was 245 million years ago. I can only hope hearing about it annoyed the hell out of any young-Earth evangelicals in the crowd — the ones who believe our planet is only 6,000 years old.

We, as firm believers in science, respect the laws of physics, erosion, and nature which formed the arches and canyons over many millennia so we could admire them in their current state.

To be as close to Arches and Canyonlands as possible, we stayed in Moab, Utah, its streets lined with restaurants, bars, and boutiques, much like other tourism-reliant towns. One evening, we had dinner at Dewey’s, which serves root beer on draft. We ordered a couple of glasses and found it to be the most delicious root beer we’ve ever had. Our waitress told us it was made just up the street at the Moab Brewery, which also serves food in its restaurant.

We went for lunch the next day and ordered a full pitcher of that fabulous root beer, which was featured in a big, bold box in the center of the menu. I tried to figure out why the beverage was so popular there, and then it hit me. We were in Utah, which has a very large population of Mormons who are not allowed to consume caffeine. So, with no coffee or Pepsi, they’ve developed a yen for root beer, which contains none of the forbidden ingredient.

I made a mental note to mention this fact to the rest of my wives.