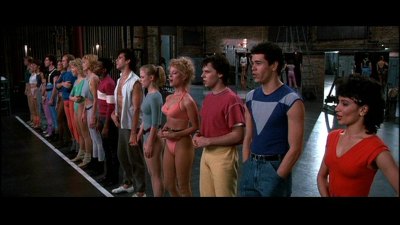 This is a diary of my trip across the US with my daughter to start her freshman year at college in New York — and my return trip, too. Read all the entries here.

While staying at my mother’s house, I’m serving as her IT guy, installing Flash on her iMac, fixing some problems with her e-mail, updating the apps on her iPhone, and getting her comfortable enough to use Siri.  She’s eager to learn but frustrated by the technology, and none of her friends is savvy enough to help her, so I’m happy to play the role of Genius Bar Guy. Even with my limited knowledge of Mac hardware, it’s easier to do while in the same room than from my home a thousand miles away.

We spend most of Day 5 hanging around the house and winding down from the four previous busy days.  In the evening, we show my daughter the movie version of “A Chorus Line.”  I remembered hating it when it first came out in 1985 — especially Michael Douglas as the director — but it seems better now for some reason.  The only other cast members we recognize are Audrey Landers and Janet Jones (still looking fantastic a year after “The Flamingo Kid” and not yet Mrs. Gretzky), but there are some terrific dancers in the ensemble whose careers never got much bigger than this movie.  It serves as a perfect companion piece to “All That Jazz,” which I showed her last weekend.

On the morning of Day 6, I make a food run to Waldbaum’s grocery store, where I worked 37 years ago.  At the time, the place seemed pretty big because there weren’t a lot of “super” markets, but now it seems awfully small — less than half the size of the Dierberg’s we frequent back home.  I approach the deli counter, where I spent so many hours that summer filling requests from women 3 times my age to “slice it leaner.”  I remember it always being busy, but today there’s only one guy working and one customer ahead of me.  Of course, she fits the stereotype of those women, asking for “two very thin slices of nova (lox), a small container of the chicken salad, but only if it has walnuts and grapes in it” and on and on.  The clerk does a very good job of not rolling his eyes at her, as he’s no doubt used to it by now (as I was after about a week behind the counter).  When she’s done, I order a few things quickly and get out of there.

I head back to Mom’s house to drop off the groceries, then drive to LaGuardia Airport with my daughter to pick up my wife, who couldn’t take time off from work to spend a week with us on the road, but is flying in to help with dorm-move-in-day tomorrow.  We’re happy to be back together as a family, and I’m happy to have her to take charge of any last-minute shopping for college.  They head to Target while I lay down for a couple of hours.

I find myself reflecting on how far we’ve come in the last 18 months, through three previous road trips to scope out potential colleges, through the applications process, through her early-decision acceptance that lifted a huge burden off her shoulders, to gathering the funds to pay for all of this. My daughter’s been texting back and forth with her two roommates-to-be, who she’s been in touch with all summer after meeting online.  They’ve already connected via Facebook and Skype to discuss who’s bringing what, and now she’s coordinating the move-in time for tomorrow.

I have a feeling she won’t get much sleep tonight, as the reality of starting college is hitting her.  My wife and I have our own anxieties, which we’re doing a pretty good job of keeping to ourselves, but we’re also excited for the adventure my daughter is about to undertake.