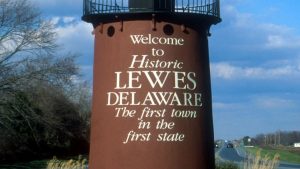 If I told you I traveled for more than 13 hours through three airports on Monday, you might think I’d flown to a different continent, but you’d be wrong. That’s how long it took for me to return from a town on the Delmarva Peninsula to my home in St. Louis through a nightmare combination of a cancelled flight, multiple weather-related delays, and a mechanical snafu.

And that was just me. Martha flew to New York, but her luggage didn’t. As of Tuesday evening, she was still waiting for American Airlines to deliver her bags.

The good news is that before all that unpleasantness, we spent five lovely days with my brother and sister-in-law in Lewes (“The First Town In The First State”), on the shores of the Delaware Bay and the Atlantic Ocean.

Lewes is fairly flat, so lots of people get around on bicycles, including my brother. I didn’t get to do that, but we did go for several nice walks through the town (like many that rely on tourism, Lewes has a couple of streets full of boutiques and restaurants) and a nearby state park with pine trees galore.

We also went to an Atlantic Ocean beach in Cape Henlopen State Park. Since I was there with Seth, I remembered a time when we were both very young and Dad took us to Jones Beach on Long Island. After putting our stuff down on the sand, he walked us to the edge of the water, stopped, and said, “This might feel a little cold, but if you’re going in, there’s only one way to do it. Run as fast as you can and dive underwater.”

We did as he told us, and when we came up, we looked back to see Dad standing where we’d left him, laughing as he cupped water in his hands, casually wetting his arms and torso, getting used to the water temperature slowly.

Ever since then, I’ve always preferred the shock and dive method. This time, the water was a bit chilly, but not too bad. Certainly nowhere near as frigid as it is on the coast of Maine (which I wrote about here). Any vacation that includes a chance for me to get into the Atlantic — riding the waves and swimming past the breakers — is a good vacation. Knowing how to handle oneself in the water is a skill I’m proud to have learned as a boy and taught my daughter at an early age, too.

As I walked out of the ocean in Delaware, I noticed a twenty-something young woman pointing at me and telling her friend, “Hey, that guy is exactly the opposite of Jason Momoa!” They both laughed, but I didn’t mind, because it’s obvious they need glasses.

The next day, we drove down to nearby Rehoboth Beach for a walk through a pine forest and then onto the town’s boardwalk. Like similar strolls in Atlantic City and elsewhere, it is lined with the usual shops, restaurants, and arcades. We stopped into one of the latter and played a few games of Skee Ball. Having never put more than a couple of bucks into the machines, I never mastered the game, but has anyone? Is there such a thing as a professional Skee Ball player, rolling balls into the tiny 100-point slots again and again?

Turns out the answer is yes. There’s even a National Skee Ball Championship (video of the 2019 finals is here), complete with commentary and a Twitch feed. Considering there are already televised cornhole and axe-throwing, it can’t be long before ESPN2 puts up a Skee Ball event late one night.

Once Seth dropped me off at National Airport, I found a place in the Southwest terminal where I could get a bite to eat, plug in my iPad, and watch some video as the hours passed. At one point, a woman sat down opposite me and called a friend to relate the story of being hassled by TSA because she’d forgotten a small knife in the bottom of her carry-on bag. It was taken away, because we can’t have people boarding planes with such dangerous weapons. Then she ordered a salad, which was delivered with real silverware — a fork and a knife that were certainly bigger than the one she’d had confiscated. Yet another episode of Airport Security Theater.

The other thing I noted was how professional the Southwest flight crew remained, even with all the delays and chaos. After flying to Omaha, I was pleasantly surprised to discover I didn’t have to change planes. The airline has always been good at swift turnarounds and this cabin crew and gate staff did an excellent job getting one set of passengers off the plane and their replacements on board. I just stayed in my seat, and we were back in the air less than 25 minutes later for the under-an-hour very smooth flight to St. Louis.

When we landed, one of the attendants told me the plane and personnel were headed next to Detroit, meaning their very long day wasn’t over. I felt sorry for them, because they don’t get paid for sitting through the same airport delays we do — only once the cabin doors close. I felt even worse for the one poor passenger who had started the trip with me in DC and wouldn’t get off until landing in Michigan. You know your travel plans have been severely disrupted when you have to fly 2,000 miles to get to a city that’s a mere 500 miles away.

Even Jason Mamoa couldn’t have helped this guy.

P.S. As I was writing this, I got an email from Southwest, offering me a $100 voucher to use on a future flight to make up for the disruption in my trip Monday. Now that’s customer service.