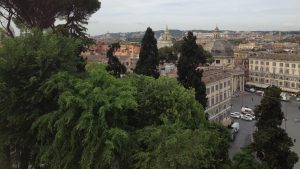 I’ve written about some of this highlights of our trip, including amazing food in both Rome and Florence. But every vacation also has its aggravations — these were a few of ours.

Near every tourist destination (the Spanish Steps, Piazza Navona, the Pantheon, the Ponte Vecchio), there were guys trying to sell crap. I don’t mean booths or kiosks full of key chains and magnets and Pope bobbleheads, but individual vendors accosting everyone who walked by to try to sell a rose or a shawl or a purse or a piece of acrylic stamped with a picture of the Colosseum.

I understand that. in a country with 40% unemployment, people need to do whatever they can to make money (e.g. posing for photos in a gladiator costume near the ruins, for the same reason there’s a guy in Times Square sweating in an Elmo costume, and a guy in an Iron Man outfit on Hollywood Boulevard), but there was desperation in the street vendors’ efforts. Many of them — particularly the rose sellers — would not take no for an answer. Even if we had just turned away two other guys in front of him, a third would approach and try to get us to buy from him. It almost got to the point where my wife and I were saying a strong “No!” to anyone who crossed our paths.

They were the bane of our existence, as were the guys selling laser pointers, which seem to have finally reached Italy. We saw guys set up a display on cardboard boxes on major downtown sidewalks, showing off what their laser pointers can do. Look, here’s one that makes a pattern with multiple beams! Pretty impressive, if it were 1977 and they were advertising the Pink Floyd Laserium Show. In 2014, not so much.

Some of these vendors (I’m using that term very loosely) walk around with six or eight paintings — not famous stuff like in the myriad galleries, but cheesy, mass-produced prints on heavy-duty paper — and lay them down on the sidewalk or in the street, in the hopes that passersby will look them over and buy one. In three cities over ten days, we never saw anyone make a purchase. But we did see these guys pick up the “artwork” and move on as soon as they saw a cop, then quickly find another location to display their wares, often in a way that blocked pedestrian traffic.

Speaking of pedestrians, based on our experience, we concluded that Italians do not like to move out of the way, especially on narrow sidewalks. Normally, when a couple is walking in one direction and comes upon a couple walking in the other direction, one-half of each couple will step behind, into single file, so that the others can pass. We encountered this often, with me always moving behind my wife — but the other couples rarely did the same. They’d just keep walking side-by-side as if we weren’t there, forcing us to step into the street to go around them.

This was also reflected in much of the very crowded downtown driving, where scooters and motorcycles zip in between other vehicles while cars entering intersections and traffic circles tended not to yield to anyone, under any circumstances. We finally decided that there must not be an Italian translation for “No, please, after you!”

On the other hand, the cabbies were remarkable at finessing their way through the streets. Sure, they got very close to other vehicles (and some pedestrians), but if we were on “The Amazing Race,” these are the guys we’d want behind the wheel. Our only complaint about them was in Florence, where there was no taxi stand at our hotel. So, we’d ask the front desk to call one, which the clerks could do by simply pressing a button. Within a few minutes, a taxi would pull up — but his meter would already be running. Apparently, they drop the flag as soon as the call comes in, not when you get in the back seat. So we paid a premium, but considering the really narrow streets and alleys they managed to navigate in a city that was built long before there were any vehicles other than horses, it didn’t bother us that much.

Besides, they helped us avoid the crowded sidewalks and street vendors.