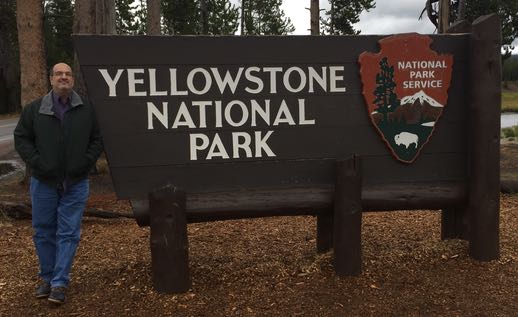 My wife and I just spent a week in Wyoming, visiting Yellowstone, the Grand Tetons, and Jackson Hole. During the Yellowstone portion, I set a new personal record for use of the word “WOW!”

Words — and even two-dimensional photos — fail to describe the beauty of Yellowstone, one of America’s greatest public spaces. Most people know it as the home of Old Faithful, but it is so much more. There are vast areas of open space, framed by tall mountains, with different geological features depending on where you go. We saw awe-inspiring views of the Grand Canyon of Yellowstone, beautiful waterfalls, forests destroyed by fire and then re-born, and natural mineral terraces formed by the wonder of geothermal activity.

As for Old Faithful, yes, it’s nice to sit there and eat a soft-serve ice cream cone while waiting for Mother Nature to blow her stack with a geyser of water 100 feet high every hour and a half (park rangers post signs at the Visitors Center predicting, with a ten minute margin of error, when the next blast can be expected). To be honest, though, I preferred the view of the Gateway Geyser in East St. Louis, Illinois (which I wrote about here), where the water goes 600 feet in the air!

There’s much more fascinating geothermal activity at the West Thumb Geyser Basin and its sister location, the Norris Geyser Basin. These are the two real hot spots (pun intended) of Yellowstone, with pools of boiling iridescent water that’s come up out of the Earth. The ground is so hot, you can’t walk on it, so the National Park Service has boardwalks throughout each area that take you safely around these hydrothermal wonders.

Interestingly, in our litigious society, there are no railings on the boardwalks, nothing to keep you from stepping off to see if the warning signs at the entrance were for real. Last year, an idiot 23-year-old didn’t believe the cautionary messages and decided to leave the path and go for a walk. He quickly found out what 199 degrees fahrenheit feels like, and was dead within minutes. We heard a story from a park ranger about another moron who this summer disregarded the danger and is now laid up in a medically-induced coma at a hospital in Salt Lake City until they can figure out how to get enough grafts to replace the skin on his entire body. This is Mother Nature’s way of saying, “Wasn’t the steam coming out of my holes enough of a head’s up?”

Then there’s the wildlife. I had never seen bison in their natural habitat, bigger than I expected, and never dreamed that I’d be bored of them after a couple of days. The first time we came upon a few bison, they were eating grass in a patch between the road and a river. Before we even spotted them, we knew to pull over because several other cars already had, their occupants jumping out to take photos.

It reminded me of the old Soviet Union, where when you saw a line of people, you joined it, and then asked what it was for. Didn’t matter whether it was bread or toilet paper, you were going to need it, so get in line. Same with pulled-over cars at Yellowstone — they were always an indicator of an animal viewing opportunity.

One of the things we learned about bison is that a group of them is not called a “herd,” it’s an “obstinancy.” However, after seeing hundreds of bison in the first two days, we got obstinate and stopped stopping for them. Been there, done that, can see them through the car window.

The other animal we saw in large numbers was elk. On our first day, while visiting West Thumb, we came upon several of them (apparently, their feet can handle the warmth), including a bull elk, which was bugling — they make that sound when they’re horny, and this was mating season — to try to attract the nearby female elk. There were a few nearby, including one cow with her calf and several single ladies just lounging around acting as if they couldn’t care less. This is known in science as the What My Nights Were Like Before I Was Married phenomenon.

We also spotted bighorn sheep just walking alongside the road, a gray wolf in a field pouncing on an unsuspecting smaller animal, antelope, deer, and maybe a moose. We weren’t sure of the latter because it was a long way off, and even through binoculars, we couldn’t discern what exactly that moving brown spot in the distance was.

The one animal we most wanted to see, but didn’t, was a bear. Everywhere you go in Yellowstone, there’s a reminder to carry bear spray when you go for a hike — but of all the people we talked to, not one had ever encountered a bear on the trail. So, we didn’t carry the spray, but then again, we weren’t really hiking. We’re two out-of-shape middle-aged people whose top speed is saunter and whose time outdoors is mostly used for getting to the next indoors location. We don’t hike and we don’t camp. We did go for a few walks, including one up a large hill for about a half-mile to get to view a lake, but nothing that required any equipment sold at REI. In lieu of bear spray, we were told by a ranger to be noisy on the trails because that actually keeps the bears away — they’re not looking forward to coming upon humans — and that’s one thing I’m good at. I’d shout out lyrics from obscure songs or make announcements to the animal population about our location, and we weren’t bothered at all. Can’t say as much for the other people on the trails, of course.

We would have gone for more walks, but the weather wasn’t our friend. We expected daytime temperatures in the 50s, but a cold front came through and kept things not much above freezing most days, with a mixture of snow, rain, and 20mph winds on occasion. That didn’t stop us from getting out of the car to see the amazing sights of Yellowstone, but combined with the thin air at seven thousand feet, spending a lot of time on our feet outdoors was not a priority. The most disappointing thing about the overcast skies was never getting to see the blanket of stars we’d been looking forward to — away from the light pollution of American suburbia, we wanted to look up and see the vastness of the night sky, but it wasn’t to be.

One thing that no one warned us about is that there’s no cell phone service anywhere in Yellowstone because there are no towers. There’s also no wifi (or TV!) in the hotels, so we were off the grid completely for several days. The good thing is that forces people who are so used to walking around looking down at their screens to actually look up at the magnificent natural surroundings they’re in. Of course, everyone still uses their smartphones to take pictures, and lots of them. In the digital era, when we don’t have to worry about running out of film, we took hundreds of pictures, including multiple shots of pretty much every place we visited in Yellowstone.

We took advantage of the vast knowledge of the park rangers, who lead tours, give educational talks, and can answer any question about Yellowstone. But the other information source we’re glad we used was Gaper Guide. This is a device you can rent at locations near any of the park entrances (we got ours in Jackson Hole), which you place on the dashboard of your car and plug into the lighter. It has a speaker and a built-in GPS, so it knows where you are and tells you stories about the parks (both Yellowstone and Grand Teton) as you drive through. You also hear stories about the history, the sights, and the science (we heard the word “caldera” more in a week than ever before in our lives), as well as tips about every turnout and picnic area and available bathrooms along the way. Yellowstone doesn’t have many roads, but without the ability to use Google Maps to navigate, Gaper Guide was an invaluable resource and worth every penny.