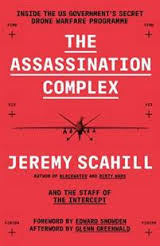 Here’s my conversation with Ryan Devereaux, one of the investigative reporters at The Intercept who have compiled “The Assassination Complex: Inside The Government’s Secret Drone Warfare Program.” Among the questions I asked him:

We also talked about the terrorist watch list, which made news again last week when the Democrats sat in on the floor of Congress to promote legislation that would ban those on the list from purchasing guns (“no fly, no buy”).