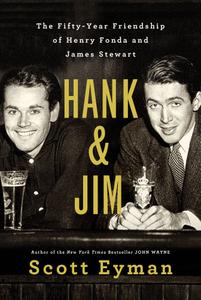 Henry Fonda and Jimmy Stewart were two of the best actors of the 20th century. Their movie credits include such classics as “Mr. Smith Goes To Washington,” “It’s A Wonderful Life,” “Rear Window,” “12 Angry Men,” “Mister Roberts,” “The Grapes of Wrath,” “Fail Safe,” and “Anatomy of a Murder.”

Scott Eyman (who has done books on John Wayne, John Ford, Cecil B. DeMille, and Louis B. Mayer) has written a dual biography of the two stars, “Hank and Jim: The Fifty-Year Friendship of Henry Fonda and Jimmy Stewart.” In my conversation with him, we touched on: