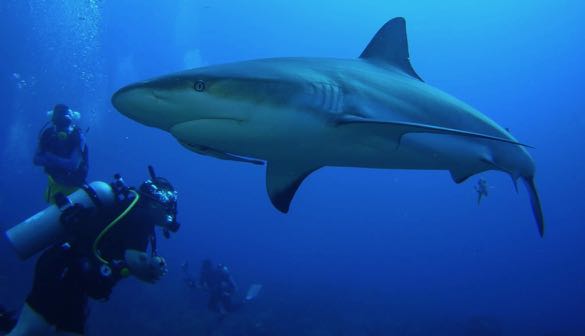 That’s not a photoshopped image. It was taken last week off the coast of Honduras by my niece, and that’s my brother-in-law in the foreground, just a few feet away from the shark. They knew there would be sharks in the water, and had some apprehension about making the dive, but were reassured by the divemasters who go down there every day and have never had a problem with those Caribbean Reef Sharks. Still, my brother-in-law admits that his heart was beating much faster on that dive than on the one they took the day before to an old shipwreck.

It reminded me of an experience I had a long time ago. I haven’t scuba-dived since my daughter was born, but in the decade before that, I was fortunate to be able to travel to some great scuba diving spots in the Caribbean. My all-time favorite dive was to the Great Barrier Reef off the coast of Australia — which, due to climate change, has suffered serious bio-damage and is nowhere near as beautiful as it was when I was there in 1990.

On that dive, I was swimming around, amazed at the colors and lifeforms below me, when I looked up to see the divemaster pointing behind me. I turned around and found myself no more than 6 feet away from a very large fish. It wasn’t a shark, but it had the same coloring, and I was startled, my eyes so wide open they probably filled the entirety of my scuba mask. Fortunately, the fish paid me no attention and simply continued on its way. When I turned back to the divemaster, he signaled for me and the rest of the group to follow him to another spot, which we did.

When we re-surfaced about ten minutes later, he asked me with a laugh, “What did you think of that barracuda?” I said something like, “Is that what was behind me?” He replied, “Yeah, we see them all the time on these dives, but we don’t tell people ahead of time or they’d be too scared to go in the water. We’ve never had a problem with them, though, probably because we take down some other things for them to eat.”

My brother-in-law confirmed that the dive crew he’d been with does the same thing, carrying a closed bucket of fish heads, which they put down on the bottom and then opened, creating a literal feeding frenzy. Apparently the sharks in that area (and the barracudas near the GBR) are satisfied enough with the seafood smorgasbord they get several times a day, so they leave the landlubbers alone.

Still, it’s quite a surprise when you realize that, without that chum in the bucket, your diving experience could have turned into an all-you-can-eat buffet featuring you as the main entree.