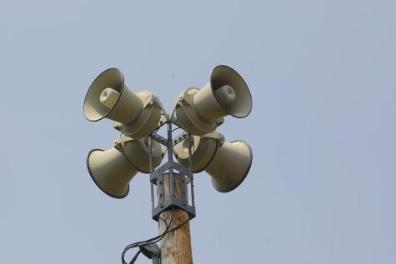 One of the stories I talked about this morning on WHAS/Louisville was a test of the tornado sirens yesterday afternoon. It surprised a lot of people, including those who ran it, because it was supposed to be a “silent” test.

I don’t know how you test a siren silently (not turning it on would seem to qualify), but since there had been some pretty severe storms in the area the day before, which caused several thousand people to lose electricity when power lines were downed by fallen trees, residents were a little on edge, and the sirens freaked some people out. There are also lingering bad feelings from February, when tornadoes did touch down around Louisville and the sirens never went off (“silent” test successful!).

The county could have avoided the apprehension by simply alerting us ahead of time. Then we would have informed everyone in our listening area that the sirens were going to be tested at a certain time. Fortunately, the siren test took place on an afternoon when the sky was blue and there was no wind or rain, so most people didn’t panic. While tornadoes can form rapidly, you can almost always see the skies get dark — even a weird green color — before anything hits the fan.

We have similar sirens in the St. Louis area, and I’ll admit that we rarely pay attention to them, despite the fact that a tornado ripped up Lambert Airport a couple of months ago, and there are severe storm warnings almost daily during the spring and early summer. My daughter is the only one who hears the sirens and makes us go to the basement. If she’s not here, I just go on with my life, although I will at least look out the window to see if the sky looks threatening.

It’s the same attitude I’ve seen most people have in a public building when the fire alarms go off. We all assume it’s a mistake (testing the “silent” alarm again?), and since no one else is leaving, we stay wherever we are. Perhaps it’s our history of being in similar situations that turned out to be nothing more than a false alarm, or it might be that we’re thinking “everyone else is staying put, so at the very least, I won’t die alone. And if it does start to look like something’s wrong, I can outrun most of these other people.”

I remember an incident at WCXR/Washington about 20 years ago. I was doing the morning show, and the rest of the station staff would wander in around 8am for sales meetings or just to get to their desks to begin the day. Many of them would stop by the studio to say hello or share some small talk during commercial breaks.

On this particular day, I noticed that several of my colleagues were walking out the door around 8:30am. After a few minutes, I sent an intern down the hall to find out what was going on, and she reported back that there was no one else in the station. I looked out the studio window at the courtyard 3 floors below, where I saw our radio colleagues, along with a couple of hundred other people who worked in neighboring offices.

It turned out that the fire alarms had gone off in the building, and everyone had evacuated. I had a crew of 10 people working on the show at the time, and none of us had heard a word or a sound — no one had thought to come into the studio and let us know.

We didn’t panic, assuming it was yet another false alarm (correct!). Instead, we stayed in the studio and talked about our situation on the air (I ran the show in such a way that we tried to share everything with our audience, and everyone on my show could say anything they wanted at any time). My sports guy, Dave, joked that this proved what he’d thought all along — that we were the least important members of the staff. John, the news guy, disagreed, saying that this proved we were so valuable to the station that they wouldn’t dare pull us off the air. Dan, the deep-voiced production god, said the sales manager probably wanted to make sure we didn’t miss any commercials because we were so sold out they’d never be able to make them up. My producer, Leigh, said that she was going to put together an emergency tape that played “Inna-Gadda-Da-Vida” over and over again in case we ever did have to abandon the studio. The intern, Karin, joked that catching fire was not the way she wanted to earn college credit. The traffic reporter, Victoria, worried that, if we did go up in flames, there would be no one to report on the inevitable backups on the main street in front of our building. Listeners called in to share similar circumstances that had happened at their jobs.

I assured everyone that not only were we safe, but we’d come out of this as winners, because I was going to demand that management give us hazard pay for working in these conditions. Then I played all three minutes of Arthur Brown’s “Fire.”

By the time it was over, the rest of the staff returned to the station. The General Manager poked his head in the studio door to make sure we were all okay, then apologized for the lack of communication, promising to have the engineer install a red light in the studio that would flash the next time the fire alarms went off in the building. He eventually did, but there were no more alarms, so the beacon never did light up and we never had to abandon the show.

Not even as a silent test.