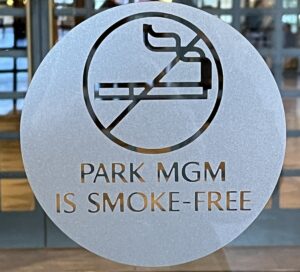 I was back in Las Vegas this weekend. For a change, I stayed at Park MGM, the 21st distinct hotel I’ve slept in during the 33 years I’ve been traveling there (with two years off due to the pandemic). Actually, I stayed in that building many years ago when it was the late, lamented Monte Carlo, but never in its current incarnation.

As I entered, I was glad to see signs on the doors announcing that the entire facility is smoke-free. That’s a rarity, since almost all casinos view smokers as the kind of easily-addicted customers they want to attract. If you’re willing to repeatedly suck on a cancer stick, they reason, you’re more likely to sit and mindlessly pour money into a slot machine for hours on end. While portions of some casinos are smoke-free (thankfully including poker rooms), those are the exception, not the rule. The industry has paid lobbyists and politicians millions to keep it that way, the health of their customers be damned. 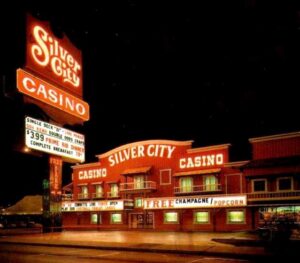 Park MGM has received lots of press coverage touting it as the first casino in Vegas to ban smoking, but I remember visiting the Silver City Casino in 1991 after it made that move. It was on the north end of the strip, not far from its sister resort, Circus Circus, and catered to low-limit gamblers — the minimum bet at the craps tables was $1. The place was kind of a dump, but I went in because it had a small poker room that spread both seven-card and five-card stud.

Today, you’d be hard-pressed to find a card room that spreads either variety, especially the latter, which went out of fashion a quarter-century ago in favor of Texas Hold’em and Pot Limit Omaha. But I played five-card stud there and pretended I was in “The Cincinnati Kid,” even with no cool-headed Steve McQueen or Edward G. Robinson types at the table. My opponents seemed more like stand-ins for Jack Weston’s sweaty, unkempt character, “Pig.” But that was just in my head. In reality, I didn’t get the chance to appear in an actual poker movie until many years later, when I went heads-up against Ben Mendelsohn in “Mississippi Grind” (an adventure I wrote about here).

Unfortunately, Silver City’s smoke-free status was only in effect for three years, and the entire place didn’t last much longer. It was demolished in 1999 to make room for a strip mall that now contains a Ross Dress For Less, a Denny’s, and a Walgreens. I still pass that spot every time I eat at The Peppermill next door.

In 2004, I wrote a piece urging legislators to prohibit smoking in all indoor businesses, with no exceptions:

There’s no doubt that airplanes are much more pleasant since smoking was banned onboard. So are movie theaters, offices, and most other places. Why not extend that pleasant atmosphere to bars, restaurants, and casinos, too? I can tell you from personal experience how much better it is to play poker in the local casinos since they barred smoking from those rooms a couple of years ago. Too bad that hasn’t been expanded to the rest of the casino yet.

Yes, cigarettes are legal, and I’m not one of those who thinks they should be made illegal — in fact, I think you should have the right to put whatever you want into your own body! — but your right to use a legal product should end where it infringes on my right to have dinner or a drink or play poker without going home with my clothes smelling like an ashtray just because I sat next to you.

While I’d like to see all the places I frequent go smoke-free, I wouldn’t bet on it anytime soon because, for now, the casinos’ advantage is too big. On the other hand, tobacco use in general is way down compared to thirty years ago, and in looking around Park MGM, it seemed as crowded this weekend as the casinos that welcome smokers.

In addition, I’m sure management saves money by not having to replace air scrubbing filters as often, not to mention the yellowing effect of the smoke on walls, carpets, etc. and the health insurance costs of covering employees who have to breathe secondhand smoke all day, every day.

It will be interesting to watch how the numbers crunch over the long term. My gut says the decision to keep Park MGM smoke-free — and other venues putting similar rules into effect — will depend on whether the clean-air clientele spends and loses as much money as their lung-limited guests.