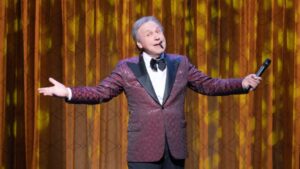 In 1992, Billy Crystal was a hot property. He had just come off two smashes, “When Harry Met Sally” and “City Slickers.” He was in the midst of a four-year run hosting the Oscars to wide acclaim. What did he do with that kind of momentum?

He made a passion project called “Mr. Saturday Night.” It was about Buddy Young Jr., a character he’d done four times in the 1984-5 season as a cast member on “Saturday Night Live.” Buddy was an old Borscht Belt comic, a combination of every Micky, Morty, and Myron, with a heaping helping of Alan King.

For the movie, Crystal called upon the writing team of Lowell Ganz and Babaloo Mandel, who were on an amazing run of their own that started in the 1970s with the TV version of “The Odd Couple,” “Happy Days,” and “Laverne and Shirley.” Then they started writing screenplays, beginning with “Splash,” and later “Parenthood,” both “City Slickers” movies, and “A League Of Their Own.” And that’s not even half of their resumé.

Crystal not only starred in “Mr. Saturday Night” and wrote the script with Ganz and Mandel, but he directed for the first time, too. The story recounted Buddy’s life, from doing jokes for relatives in the living room to his first shot in the Borscht Belt to his own primetime variety hour, which aired Saturdays at 8pm on CBS (this was in the days when people actually watched TV on Saturday nights – thus his nickname). But Buddy was a terror behind the scenes and when he couldn’t reel that part of his personality in, he spouted off about the network on live TV and was cancelled. I mean that in the literal 1950s sense of the word — he was kicked off the air. From then on, he was a has-been scraping and clawing for any morsels he could get out of show business.

I liked the movie because, while I grew up loving the more contemporary comedians (e.g. Robert Klein, George Carlin, Richard Pryor), I had a lot of affection for the era which preceded them. I’m talking about the real-life Buddy Young Jr. type of comics who always performed in tuxedos, like Shecky Greene, Morey Amsterdam, and at least a dozen guys named Jackie. Crystal obviously loved them, too, and put everything he had into the character and the movie, but it barely made back half of its $43 million production budget.

In late 2021, Crystal brought Buddy back, this time in a stage musical adaptation, also with the help of Ganz and Mandel. They worked on it in out-of-town runs for six months or so before debuting it on Broadway in April of this year. Unfortunately, it was about as successful as the movie, closing in September.

Why am I telling you all of this? Because a few days ago, my friend Mark Evanier wrote about a filmed version of the “Mr. Saturday Night” stage production that was shot during the run and is now streaming on a service I’d never heard of and don’t subscribe to, BroadwayHD. But Mark found a workaround, a seven-day free trial available through Amazon Prime, that allowed him — and me and you — to take a look at what Crystal and his collaborators put together.

Mark liked it a bit more than I did (read his review here). In the movie, the makeup Crystal wore to play the older Buddy never looked quite right, but the stage version has the opposite problem. Crystal is now 74 with gray hair, more age-appropriate for Buddy’s later years. But in the flashback scenes to the younger Buddy of the 1940s and 1950s, it’s his dark toupee that seems out of place.

Throughout the show, Crystal just seems to be trying too hard. While that’s a natural characteristic of Buddy’s, it’s clear that like him, Crystal will do anything to please the crowd, including a scene in which he does call and response with theatergoers while scat-singing in Yiddish. Oy!

To make matters worse, Crystal has never been a great singer. Oh, his limited range worked in short bits like the medley he used to open many Oscars telecasts. However, around real Broadway performers — especially his female co-stars, who can all belt it out with much greater range — Crystal’s singing suffers by comparison. When he gets serious and somber, he kinda reminds me of when Jerry Lewis did the same. And I don’t mean that as a compliment.

His movie-costar, David Paymer — who’s been great in everything he’s done since I first spotted him as the cabbie driving Alan Arkin and Peter Falk around Manhattan in “The In-Laws” in 1979 — returns as Buddy’s older brother, Stan. He’s still fine in the part until he has to sing a couple of numbers, but you can tell from the look on his face that Paymer knows his shortcomings in that department, unlike Crystal.

The songs by Jason Robert Brown and Amanda Green are passable but instantly forgettable. And there are too many of them (17!), particularly in the second act, where a couple of the tunes are nothing more than filler, and come at a time when the goings-on should be rounding the turn to the big dramatic conclusion.

I know Broadway musicals run long — after all, people pay hundreds of dollars for even the cheap seats, so they want their money worth — but “Mr. Saturday Night,” based on a two-hour movie, is padded too much merely to get it over the two-and-a-half-hour mark.

One last thing. In both the movie and musical, Buddy berates Stan for booking him on “The Ed Sullivan Show” on February 9, 1964. That was the night The Beatles made their American primetime debut in front of 73 million viewers, a great success for them, but an impossible spot for whoever followed them. Well, in real life, the act that followed the Fab Four were the married comedy duo, Charlie Brill and Mitzi McCall, who were making their debut, too. As they explained on “This American Life,” it didn’t exactly go as they’d hoped. You can listen to that segment here.