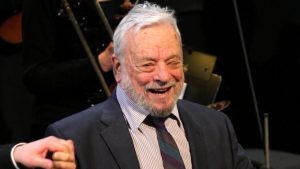 I didn’t post anything this weekend about the late Stephen Sondheim — who died a few days ago at 91 — because I have nothing to add to what you can read elsewhere by people much more knowledgeable about him.

I enjoyed some of his work (e.g. “Funny Thing Happened On The Way To The Forum” and “Sweeney Todd”), but I also saw a few of his shows that did nothing for me (“Sunday In the Park With George”). Don’t write and tell me why I’m wrong or what a theater ignoramus I am. That’s merely a reflection of how I felt after seeing some of his musicals performed on stage.

Of course, no list of Sondheim’s work would be complete without “West Side Story,” which he wrote the lyrics for. When combined with Leonard Bernstein’s score and Jerome Robbins’ choreography, the show was not only a Broadway success, but has been produced umpteen times around the globe. The 1961 movie version went on to win 10 Oscars and has been a favorite since my parents first showed it to me, and I’m happy to say the pleasure was passed down to my daughter, who also loves it and knows all of Sondheim’s lyrics from the show.

Tonight, I’m going to a press screening of Steven Spielberg’s remake of “West Side Story,” about which I’m holding my tongue (and my breath) until I post my review here on the day it opens in theaters, December 10th. I’ve read reports that Sondheim saw and liked it, so perhaps it will prove wrong my feeling that there are certain classics that got it so right the first time, there’s no need for a reboot. Instead of trying to improve world-class gems, Hollywood would be better off fixing titles that didn’t work in their original form.