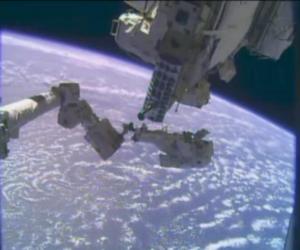 Watching TV coverage of the astronauts working outside the International Space Station yesterday, I wondered if some news executives were secretly hoping something would go wrong, and it would turn into a disaster a la the movie “Gravity.”

No one — even the most jaded journalist — really wants tragedies to occur, but covering them does make news ratings go up. That’s one of the reasons reporters travel with the President everywhere he goes. More than 99% of the time, nothing goes wrong, but when some lunatic takes a shot at the commander-in-chief, you want to be the person who can tell the story first-hand.

The live coverage of the spacewalk didn’t offer any super-compelling pictures, although I always find it beautiful to see humans in the foreground with a wide shot of the Earth in the background — particularly yesterday, on the 45th anniversary of astronaut William Anders getting the first photo of Earthrise as Apollo 8 came around the dark side of the moon on Christmas Eve, 1968.

The irony is that most people have no idea that there are humans in space. Long gone is the era when liftoffs and splashdowns and landings were events that got worldwide attention. Occasionally, a video like Chris Hadfield singing David Bowie’s “Space Oddity” in zero-gravity goes viral, but the public pays little attention otherwise.

Even with the popularity of “Gravity,” that hasn’t changed. There were probably some who came across yesterday’s spacewalk on their television and, rather than being amazed by astronauts at work, were disappointed that the pictures weren’t as good as the special effects in Alfonso Cuaron’s movie.