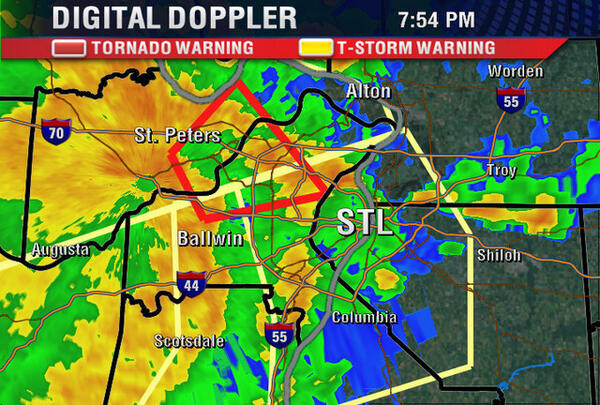 Whenever severe weather rolls through the St. Louis area (i.e. every spring), we get calls from friends and family in other cities to see if we’re okay and if there was any damage to our house.

We weren’t home when the tornado warnings were issued Wednesday night because we’d gone to Ronnie’s Cine in South County to see a press screening of the Jackie Robinson biopic “42” (one-word review: meh). About two-thirds of the way into the movie, a guy walked into the theater, hopped up on the area in front of the screen, and started waving his hands in the air. For a moment, I flashed back to the Aurora movie theater massacre and swallowed hard. Then the guy cupped his hands over his mouth and shouted something, but we couldn’t hear it because we were three rows from the back of the theater, and the movie was still playing! However, we noticed people in the front rows begin to get up, gather their belongings, and leave. Next, the people behind them did the same thing.

We had no idea what was going on — maybe a bomb scare? As we stood up and joined the exit queue, I felt my phone vibrate in my pocket at the same time my wife heard her phone in her purse. We took a look and saw a text message from our daughter in New York: “Are you okay??? Heard about the tornado!!” That was the first we’d heard about it, breaking news about our severe weather, from a thousand miles away.

We were herded into the lobby area, but kept away from the many windows and glass doors at the theater entrance. Then, like everyone else, checked our phones to gather some information and discovered that a tornado had touched down in Hazelwood (in north county) and the weather service warning for our area was still in effect. I looked at the Doppler radar image like the one above and quickly realized I had no idea what I was looking at, other than surmising we were under attack by oddly shaped quadrilaterals.

As we milled around with the rest of the crowd near the concession stand, I joked that this was probably just a ruse by Ronnie’s to sell more popcorn. Sure enough, at least a dozen people were reloading on snacks and drinks. My wife said the theater should give us free candy. Of course, they didn’t, and after about 20 minutes, we were permitted to re-enter the theater.

I heard another customer grumbling that they should have left us in there, since the theater has no windows and was probably safer, but considering how long it took to get everyone out of their seats, down the aisles, and out the door, I think management made the right call.

As we returned, I noticed that the movie image on the screen had been paused. I had never seen that before, having lived through the era of movies on actual film, which couldn’t be paused or risk being melted by the projector bulb’s intense heat. In circumstances like this, a film projector would have been turned off, but in digital projection, the operator simply hit pause as we would on our home DVRs (I don’t think they had to be concerned about image burn for only 20 minutes). Once everyone was seated, the movie resumed.

Afterwards, the severe conditions had left the area, so we only had rain to deal with as we listened to local news reports and heard that, in fact, three confirmed tornadoes had touched down. Fortunately, in our neighborhood, the storm didn’t do much more that knock a few branches off some trees, although an elementary school a few miles away had the roof torn off five classrooms.

As for the trees, they were part of the reason we moved into this house 14 years ago. We didn’t want to live in a new subdivision where I was taller than the newly-planted trees. Having old-growth oak, maple, ash, and other trees gives the community a lot of shade and a wonderful feel. Unfortunately, storms have taken their toll on the trees in the last decade. We’ve lost several big pine trees and the 40-foot ash that was in our front yard, and the lawn is often strewn with branches and twigs after each storm.

Springtime in St. Louis — always a good time to be in the tree-removal business, and once hail season begins, the roofing contractors will hit the jackpot, too. The rest of us are just happy to have a home that’s still standing.