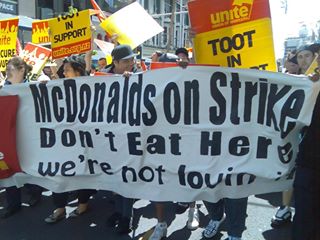 The federal minimum wage has been stuck at $7.25/hour for years. In the last week, fast-food workers in 7 cities went on strike over low wages, but neither the restaurant industry nor Congress seems willing to raise the rate. On my America Weekend show, Slate’s Jeremy Stahl helped me debunk some of the arguments against increasing the minimum wage, such as:

The overarching problem here is that while the workers have the numbers on their side, the restaurant industry has the lobbyists in Washington, who make sure that Congress stays on their side. What we need is to take the minimum wage out of the hands of politicians by making the increase automatic each year based on the rate of inflation.

In 1976, I spent a summer working at McDonald’s — five days a week making breakfast and lunch — and earned the then-minimum hourly wage of $2.30. Last summer, my daughter worked at an ice cream store and was paid $7.25/hour. That nearly-five-dollar-an-hour difference might sound like a lot, but if my 1976 salary were indexed for inflation, it would be $9.42/hour in 2013 dollars. That’s above the $9/hour proposed by President Obama in his State Of The Union address earlier this year, but it still means an annual salary of only $19,593.60 for a fulltime worker. It’s virtually impossible to live on that kind of money today, let alone raise a family.

It’s not even enough to get the attention of members of Congress.