Sweet Baby James Still Has It 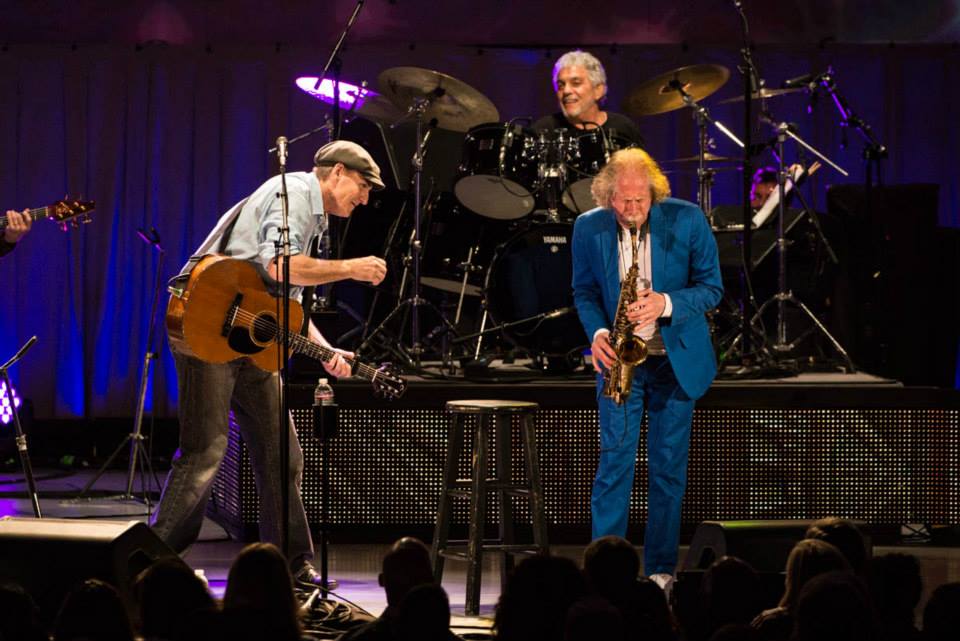 I don’t have many regrets in my life, but I wish I had never given up playing the guitar. I took lessons for five years, but abandoned it when I was 13. I can still pick one up and play a C chord, or a G or maybe an E-minor, but not much more, and certainly not James Taylor’s “Sweet Baby James” album. There was a time, when I was 12 years old, that I could play every song on that album. My guitar teacher had recommended it, so I bought it and practically wore out the grooves on the vinyl, listening to it over and over and learning the guitar parts by heart.

All of that came flooding back last week when my wife and I went to see James Taylor in concert, and he did several songs from that classic album. At 66, his voice is still strong, his banter with the audience between songs was playful, and his band was terrific. Two of them are pictured above — It included saxophonist Lou Marini, an original member of the “SNL” and Blues Brothers bands, and drummer Steve Gadd, who has played on dozens of classic albums including Steely Dan’s “Aja” and appeared in Paul Simon’s movie “One Trick Pony.”

As for the crowd, I don’t want to say Taylor’s demographics are a little older, but when we baby boomers gave him a standing ovation, there was a collective groan and bone-creak. Fortunately, that means almost everyone remained seated. Unfortunately, that didn’t stop the photo people, who insisted on using their smartphones to document the event.

I wrote about this phenomenon in March, after attending the Experience Hendrix concert:

The other annoying thing was the huge number of people using their smartphones to take video of the concert. To me, the idea of paying to go to a live venue is to see the performances as they happen on the stage, not to watch them on a four-inch-wide screen. But the guy in front of me had a different philosophy, as he regularly whipped out his iPhone to shoot a minute or two of the show — he alternated between lifting the phone and downing a Bud — which meant I, too, was forced to watch the show on his phone display.


It’s been years since I went to a concert, but I remember most of them being preceded by an announcement that audio and video recording is prohibited. I suppose that’s impossible to police in the smartphone age, but if this amateur videographer actually watched the footage he shot from 30 rows away and saw how small everyone and everything looked, maybe he’d knock it off.

What made the woman at the James Taylor concert worse was that she had to take a picture of every song, as if she’d be able to distinguish between them later, as if a still of “Fire and Rain” looks different than a still of “Your Smiling Face.” On occasion, instead of getting the detail-less view from row MM, she’d take a shot of the big video screen, forcing me (and everyone else around us) to watch TV through her smartphone, instead of the live performer we’d paid to enjoy.

There’s a remarkable arrogance to that, not caring that you’re distracting everyone around you, just like when you’re the only person in your section standing and dancing to a song while we’re all seated. To paraphrase Danny Glover in “Lethal Weapon,” we’re getting too old for that.

Still, she was not enough of an annoyance to ruin the concert for us, because the weather for the outdoor show was perfect, Taylor sounded so good, and his mix of new and classic material made for a very enjoyable night.

Now if I could only remember how to play “Sweet Baby James.”