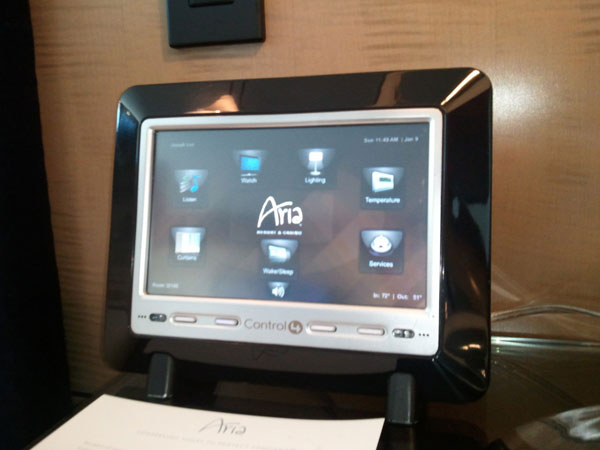 On vacation in Vegas last week, I walked into the room at Aria and turned on the light in the entranceway. The rest of the room was kind of dark because the curtains were closed (keeping out the oppressive Vegas sun on a June afternoon), so I went to turn on the desk lamp. Nothing happened. I flicked it off and on a couple more times, still nothing. I reached for the phone and told the operator about the lamp. She said she’d send someone right up.

I pressed a button on the wall to open the curtains, then started to unpack. Two minutes later, a hotel engineer showed up with a light bulb. I told him the floor lamp didn’t work, either, and that’s when he asked me if I had tried using The Controller. I didn’t know what he was talking about.

He pointed me to an iPad-like device on the nightstand, from which I could control the lights in both the bedroom and the bathroom. Then he hit a few buttons, and all the lights went on. He then showed me how to use The Controller to adjust the thermostat, open and close the curtains, or turn on the TV. I thanked him and he left.

The Controller may seem really cool, but it’s overkill. I wasn’t staying in a 3-bedroom, two-level suite . I was in a regular-sized hotel room, where it’s impossible to be more than 15 feet away from anything. If I want to adjust the thermostat, I’ll walk over to that wall and change it. If I want to turn on the TV, there’s a separate remote already. And why on earth would I ever be lying in bed and have a sudden need to turn on the light in the shower? I can be as lazy as the next guy, but this was off the scale.

Not only that, but the screen on The Controller never went fully dark, so at night, it created a glow in the room. While there were blackout curtains, that glow, combined with the little LED indicators on every wall switch and outlet, meant it was never really dark in the room. It’s hard enough to sleep in Vegas without that luminescent distraction.

On the other hand, the room was more soundproof than many other hotels I’ve stayed in. Normally, around 9am each day, I’m awakened by the housekeeping staff knocking on doors, entering rooms, vacuuming, moving furniture, and talking loudly. At Aria, the door is thick enough to keep all of that hall noise to a minimum, and since very few of us wake up early in Vegas, that’s a good thing.

I don’t worry about housekeeping knocking on my door, because I put out the Do Not Disturb sign as soon as I check in, and leave it there until I check out. I don’t need my room vacuumed, cleaned, and rearranged every day. I didn’t see a sign hanging inside my door, though, so I asked a maid for one, and she told me to use – yes — The Controller to turn on the exterior privacy light. I did, and wasn’t bothered for the four days I was there.

Except for the last day. I got up around 10am, went down for breakfast, and when I returned, the message light on my phone was blinking. The message was from someone in housekeeping informing me that they had seen my privacy light and didn’t want to bother me, but if I needed the room cleaned, I should contact them. As if I wouldn’t have figured that out myself.

But here’s the part that bugged me. If I’ve turned on the privacy light, or hung a Do Not Disturb sign, why are you calling my room? That counts as disturbing me! Granted, I wasn’t there at the time, but if I’d still been asleep, a phone call from housekeeping would have been just as annoying as a knock on the door.

I think The Controller needs a new button, one labeled I’m Not Kidding, Leave Me Alone.