The Day I Almost Died For Cereal 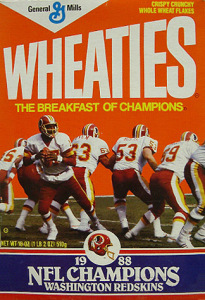 It’s Super Bowl Week, and I’m thinking back to the first time I attended the big game, and an event afterward that had me worried I was going to die.

At the end of January 1988, I’d been the morning man at WCXR/Washington for just over a year. It had been an amazing 12 months of success for both my show — what with ratings doubling — and for the Washington Redskins, too. They had just beaten the Broncos in Super Bowl XXII in San Diego, which my newsman (John Ogle) and I witnessed in person at Jack Murphy Stadium after broadcasting extra shows in the midday time slot on Saturday and Sunday from the team’s hotel. WCXR wasn’t the station carrying the game, but we owned the event in our own way.

When we returned on Monday, we decided we had to own the victory parade on Tuesday, too. We contacted General Mills, which had put the Redskins on the front of a Wheaties box, and convinced them to give us an entire tractor-trailer full of those Wheaties boxes to give away to the fans at the parade. We were good at talking companies into providing promotional material for all sorts of things — like the time I gave one listener a thousand Strawberry Twinkies.

We did our show that morning in the studio, then headed down to a spot on Pennsylvania Avenue that the cops had blocked off for us to park the truck. Our plan was to do live reports (via an early-era cell phone, as big as a brick, and just as reliable for communication) from the top of the truck during the parade and hand out the cereal boxes immediately afterward.

When we arrived at the designated space, a huge crowd surrounded us as the driver helped us up a ladder to the roof. Then he stashed the ladder safely underneath, leaving me, my sports guy (Dave), my producer (Laura), and a rep from General Mills up top, while our promotions director (Ginger) stayed in the cab of the truck. John was doing reports from another brick-sized cell phone from a different vantage point on a terrace across the street — a decision that would soon seem like the smartest move any of us made that day.

The parade started, and the fans went wild — not just for the players, but for the cereal boxes. We explained that we’d give them away after the parade, but they were too pumped up and wanted them now. Never mind that they’d be on sale for $1.29 in every store the next day.

The crowd started rocking the truck. Violently. Our driver stuck his head out the window of the cab and asked what we wanted to do. Afraid they’d tip us over, we told him to open the doors and have Ginger start handing out the cereal — but that only brought a bigger crowd, which had obviously been enjoying some adult beverages during the parade.

It became quickly apparent that we were about to die, all for the cause of a boxed breakfast product. After about 500 of the 10,000 or so boxes had been dispensed, it was beyond out of control, with no cops nearby for crowd control (they were busy on the parade route). We truly feared for our lives. We told the driver to just get us the hell out of there. He hopped back into the cab and started to drive away.

Those of us still on top couldn’t believe the scene we were watching below. Ginger was still inside the truck throwing cereal boxes to the crowd, which was running down the street following us like some insane Pied Piper story.

Finally, we lost them and drove another 15 blocks or so before the driver pulled over. When he got out, he told us it was okay to come down, but we couldn’t. The ladder was still back on Pennsylvania Avenue, and it was quite a leap down from the top of the tractor-trailer — especially for Laura, who was wearing high heels. Fortunately, we’d parked across the street from a DC police station, and as a cop walked out the door, we shouted to him for help, “Do you have a ladder?”

He paused for a perfect cop moment and replied, “No, I don’t, but you’re gonna have to get down from there, because it’s illegal to ride on top of a truck like that!” I had to hold Dave back before he tried to bean the cop with a Wheaties box. Just then, a utility truck pulled up, offered us a ladder, and helped us down.

Now we were only left with two problems. One, how do we get back to our cars, which were still on Pennsylvania Avenue (we certainly couldn’t drive the truck back down there)? And two, what the hell were we going to do with 9,000 boxes of Wheaties?