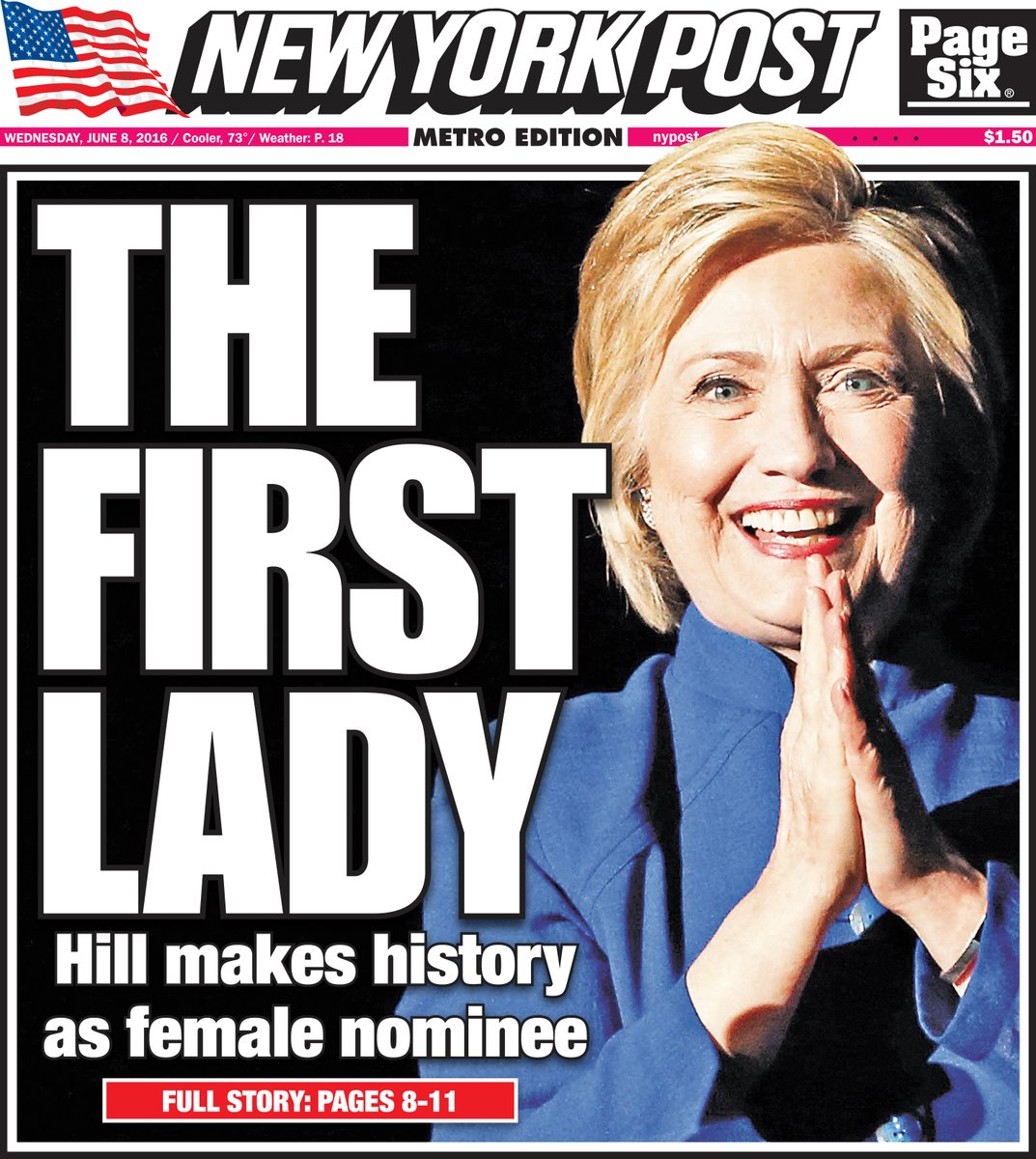 That’s quite a front page, considering how much the NY Post has bashed Hillary Clinton over the years.

Her speech a couple of hours ago, as she officially became the presumptive Democrat presidential nominee, hit exactly the right tone. It was the first time I’ve heard her invoke the history of women’s rights in the last century as a prelude to her becoming the first female major party presidential candidate. You could see in her eyes how thrilled she is to — after a lifetime of fighting for causes she believes in — finally have a chance at the biggest bully pulpit in the world.

Speaking of bullies, her shots at Donald Trump were just the beginning. Of course, every other word out of Trump’s mouth from now on will be an attack on Clinton since he has so little policy to promote, but Clinton has a yooge team of people who will be devoted to attacking him on a regular basis — much of it by simply using Trump’s own words against him. It will be unlike anything he saw from the weak field of Republican opponents. He’s now up against a campaign whose opposition research and quick-response will take everything James Carville and Paul Begala did for her husband in 1992/1996, add it to what David Axelrod did for Barack Obama in 2008/2012, and play “the women’s card,” too.

In the end, she’s going to win. Don’t let the national polls fool you. They don’t matter because we don’t elect presidents by the popular vote. It’s about the electoral college and the country’s demographics. As I have written several times in the last six months (and as recently as four weeks ago),

“I don’t see any group other than white men over 50 that Trump has a chance of winning, and there aren’t enough of them to come close to an electoral win. He has virtually no shot with women, African-Americans, or Latinos.”

“It is impossible to be elected president in 2016 with only white men voting for you. The demographics of this country have changed too much.”

Until someone shows me evidence of how Trump overcomes the simple math of those statements and how the electoral college map changes dramatically — or something unforeseen happens to Hillary Clinton between now and November — she will be our next president. Those white men who support Trump will have to wake up and accept the New America they live in — the one where our nation’s first African-American president (a two-termer) will be succeeded by our first female president.

As for Bernie Sanders, he is at a crossroads. While I admire (and voted for) him, he is in danger of hurting his legacy if he continues to whine about the system and claiming he’s going to turn the super-delegates in his favor by the time the Democrats have their convention in Philadelphia in six weeks. That’s not going to happen. They are already mostly Clinton loyalists, but even if they weren’t, it’s extremely unlikely that they would overturn the will of the people, as expressed by the millions more Americans who voted for her. When any game is over, the winner is the one with most points — the loser can’t argue that the championship be awarded to any else.

Sanders’ role going forward has to be to energize his youthful supporters and, along with President Obama (whose popularity ratings are very high), get them to support Clinton and stop Trump. By doing so (e.g. using his massive e-mail list), he’ll earn the respect of the rest of the Democrats and perhaps a bigger role when he returns to the Senate. He has already proven himself to be a man of his word, a politician who really wants what’s best for America, and he’ll retain that reputation if he doesn’t go around acting like The Bitter Loser.

The other question remaining after the last week is how loudly Republican leadership will back Trump going forward. Paul Ryan, Mitch McConnell, and others have already proven they have no scruples, by denouncing Trump as a racist yet still endorsing him for the presidency. That’s a sleazy matter of putting party before country, and makes one wonder exactly how abhorrent a candidate would have to be for those GOPers to withdraw or withhold their support. How many of them will actively campaign for Trump?

Another thing working against Trump: recent stories indicate that he has virtually no national campaign organization, there’s disarray within his group of advisers who are frustrated that he does and says whatever he wants regardless of their suggestions, and Clinton has raised way more money than he has. Trump has claimed he’s going to self-finance his campaign, but there’s been no evidence of that so far — he prefers to rely on the free media he’s so willingly given by cable news and other outlets — and many major Republican donors haven’t written the big checks he’ll need going forward.

Trump is all about ego and his brand, but I wonder whether that brand — and thus his business — has been tarnished by his idiotic outbursts. I haven’t seen much coverage of that angle during the campaign, but I bet we’ll see some soon in the lull between the end of the primaries and the party conventions that start next month. He may believe that there’s no such thing as bad publicity, but that might be tested by how it affects his bottom line — not politically, but financially.

One last point: I think I speak for everyone in America that we’re delighted not to have to hear the phrase “Super Tuesday” again until 2020.