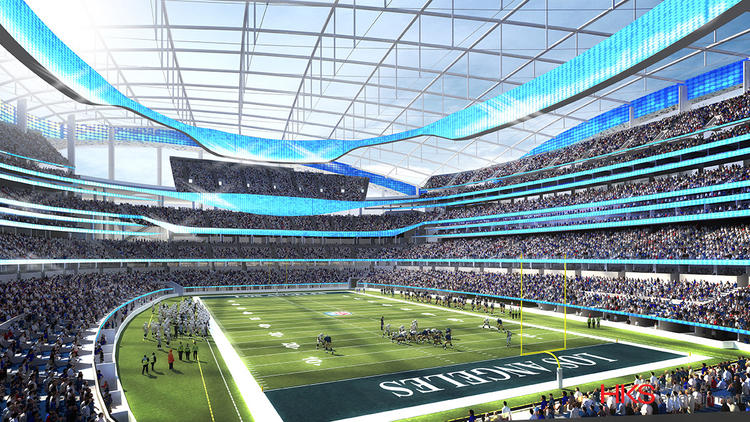 St. Louis media was in a tizzy today about an LA Times article about the new stadium complex that Rams owner Stan Kroenke wants to build in the LA suburb of Inglewood. The complex itself isn’t news, but two parts of the updated story got lots of attention.

One is that the stadium will have two home-team locker rooms and owners’ boxes, indicating that Kroenke would like to have another team co-habitate the facility. This might be in response to the Oakland Raiders and San Diego Chargers announcing a few weeks ago that they want to build a stadium to house both of their teams in another LA suburb, Carson. Since Kroenke owns the architecture firm that designed his new stadium, it couldn’t have been hard for him — after hearing about the Raiders/Chargers plans — to simply order new blueprints showing dual home team setups in his building.

Why would Kroenke want someone to share his stadium? Simple answer: income. The other team would have to pay him rent to use the place and he’d have more dates on the stadium calendar filled with fans who will spend lots of cash on concessions, which he also owns. Remember, this is the stadium Kroenke has said he will build with his own money — unlike the Carson proposal, or the one that’s trying to keep the Rams in St. Louis (which I still predict will fail, much as the Rams have done on the field for the last decade). Besides, if the NFL does want to move two franchises to Los Angeles, they can both live in Stan Stadium.

The other aspect of the story that’s getting overblown attention is the roof of Kroenke’s stadium, which will be made of super-strong glass, with projectors that can cover the roof with a corporate logo which millions of airline passengers would be able to see from planes landing at nearby LAX. But that’s not that big a deal. Here, anyone landing from the east at Lambert Airport can glance at downtown St. Louis to see The Arch and The Edward Jones Dome, which has its corporate sponsorship logo clearly visible on its roof. Same for Lucas Oil Stadium in Indianapolis and the Mercedes-Benz Dome in New Orleans.

So Kroenke’s roof ad isn’t groundbreaking, but I wonder whether the glass on top will have a magnifying effect on a sunny day, turning the field and some sections of the stands into an Easy-Bake Oven. They had that problem at the Vdara hotel in Las Vegas five years ago. On a sunny day, the glass reflected and magnified the solar rays so much that guests complained of singed hair and melted plastic.

On my show today, I talked with Joe Holleman of the St. Louis Post-Dispatch about whether Kroenke will be able to convince the other billionaires at the NFL owners meetings this week that they should vote in favor of his move to Los Angeles, and how little appetite I have for St. Louis to buckle to his blackmail by allocating hundreds of millions of taxpayer dollars to build a new stadium for the Rams.