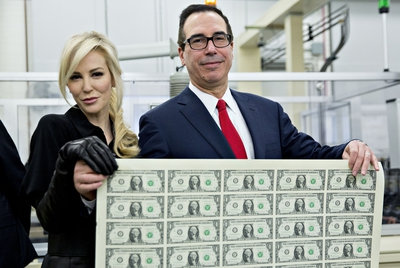 Much was made of the photo last week of Treasury Secretary Steven Mnuchin and his wife, Louise Linton, holding up a sheet of new $1 bills. It was said to be proof of their arrogance and love of money. After all, he’s an ex-Goldman Sachs banker and movie producer, and they live in a big mansion. Okay, fine, but the criticism was still off base when it came to the photo op.

In that cabinet position, Mnuchin’s signature now appears on American currency, alongside that of US Treasurer Jovita Carranza. You have to admit how cool it is to look down at money and see your own name and handwriting. If that were me, I’d do exactly what he did — go to the Bureau of Engraving and Printing and take a picture with some newly-printed cash that hasn’t gone through the cutting device yet. And, yes, I’d invite my wife to come over and be in the shot with me.

This isn’t some privilege of the super-wealthy. You can buy your own sheet of uncut currency online or at the Bureau’s gift shop after you’ve taken the tour (worth the trip next time you’re in DC — bring the kids). That’s exactly what I did 30+ years ago when I wanted something unique as a gift for my father-in-law. He loved it and put it up on the wall of his office, framed. I can only imagine how much cooler that would have been if the money had my name on it.

By the way, there’s another photo you probably didn’t see from the same day last week, from a different perspective. It shows both Mnuchin and Carranza showing off the brand new uncut currency, and there’s nothing evil about it. 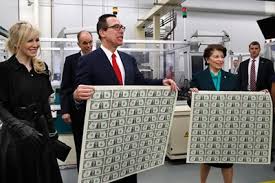 Credit: those photos were taken by Jacquelyn Martin of the Associated Press, who provides some background here.