The Monster On The Cover 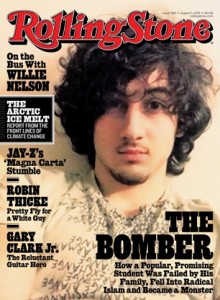 We have a group of people in this country I call the Professionally Angry. They wake up every day ready to be pissed off about something, anything. They infest the internet, the cable news networks, talk radio, op-ed columns — anywhere they can spout their negative opinion.

Naturally, this week’s cover of Rolling Stone, with a photo of Boston Marathon bomber Dzhokhar Tsarnaev, set them off. Forget the fact that most of them have never read an issue of Rolling Stone, or that the same photo ran on the front page of the New York Times and other newspapers, or that there’s a very well-researched piece by Janet Reitman inside the magazine. The photo alone was all that was necessary to launch the Outrage Of The Day punditry.

Since there’s virtually nothing that offends me, and since I read the story and thought it offered a revealing look at Tsarnaev as the nice-guy-outside-monster-inside, I thought it would be interesting to get the perspective of someone who not only lives in Boston, but works for a print publication. So, today on America Weekend, I talked with Eric Randall of Boston magazine. Listen, then click here to subscribe to these podcasts via iTunes!