The Other Side Of The Security Facade 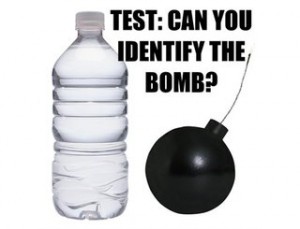 You go to the airport to catch a flight, but before being allowed to proceed to your gate, you have to wade through the TSA security checkpoint, where you have to take off your shoes and belt, throw away your bottles of liquid over 3.5 ounces, prove to the screeners that you’re not carrying anything dangerous, reveal yourself inside a backscatter x-ray machine, and run the risk of being felt up by a government agent.

But once you get past the checkpoint, could you buy the ingredients for a bomb or other device at the terminal’s stores, restaurants, and newsstands? Evan Booth thought you could, and set out to prove it by devising several weapons using only the items available for purchase on the other side of the security facade.

I thought it was a fascinating experiment, so I invited him to discuss his Terminal Cornucopia on my America Weekend show. Listen, then click here to subscribe to these podcasts via iTunes!

On Terminal Cornucopia, you can see video of Evan constructing lethal weapons from common items sold in airports after the security checkpoint.