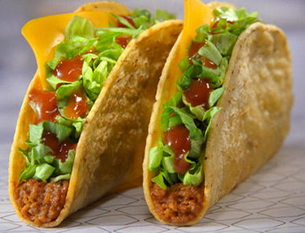 Seeing the Wall Street Journal’s story on Jack In The Box tacos (described as “a wet envelope of cat food”) made me think of my college days.

There was a Jack In The Box a couple of miles from campus. It was the only place to get food late at night, and considering the amount of pot we smoked in those days, there were always several of us with the munchies. Unfortunately, I didn’t have a car. Fortunately, my good friend Phil did. He and other car-owners in the dorm would, several times a week, walk the hallways well after midnight to announce a Jack In The Box run and take orders from other students.

Sometimes, there were a lot of them — burgers, tacos, Breakfast Jacks, Bonus Jacks, fries, whatever — and whoever went along with the driver was tasked with getting both the orders and the money. Whenever Phil drove, this responsibility fell to me.

We discovered very early on that, by the time we returned with the food, it was no longer anywhere on the warm scale. So we’d go to JITB, order our own stuff, eat it there while it was hot, and when we were done, order everyone else’s food and lug it home. No one in the dorm complained because a) they were too hungry, and b) they were too stoned to care.

Phil and I had a history of wagering on silly things. For instance, there was the time he bet me that I couldn’t eat thirty pieces of raw spaghetti in two minutes. When I didn’t swallow the last pasta twigs until the 2:05 mark, I had to pay him off. Another time, he bet that I couldn’t drink a 12-ounce beer in under seven seconds. I punched a hole in the side of the can with a ballpoint pen and shotgunned it in five for the win.

One night, Phil commented that he liked JITB tacos so much he could eat a half-dozen of them with extra hot sauce. I’d seen him scarf several of them down, but six seemed like a big number to me. Naturally, I offered a bet — I would take the under on six tacos & sauce (I would win if he didn’t get past six). He asked if he had to eat all of the seventh taco and I said he’d get the win if he ate half of it. He agreed and the bet was on. Two other friends heard about the bet and wanted to see him do it, so all four of us piled into Phil’s VW bug.

This was all in the days before events like the Nathan’s hotdog eating contest or competitive eaters like Molly Schuyler, who I interviewed in 2014 after she ate a 72-ounce steak in two minutes and forty-four seconds (you can hear that conversation here). We were just college kids making our own fun.

At JITB, the guy at the counter saw us coming and alerted the other person working the late-night shift that the crazy college kids were about to walk in with a big order. When we told him about the bet, he sized up Phil — six feet tall but rail thin — and said he didn’t think he could do it, either. After Counter Guy and his colleague made the order (including whatever I and the other three guys wanted), he came around the counter to watch this fast-food-orgy.

The notion of what was about to happen suddenly struck me as hysterical, no doubt boosted by my earlier herbal inhalation. So I sat there laughing as Phil chomped into the first taco. It didn’t take long. Neither did the second, third, or fourth. He started to slow down on number five and I thought I had him, but when he finished it off and applied more hot sauce to the sixth taco, he had a smile on his face that told me he was going the distance. He made it all the way through taco number seven, then sat back with his hand out, waiting to get paid, while the rest of us — including the clerk and the cook — gave him a standing ovation.

The next day, while news of Phil’s food adventure made it around the entire dorm very quickly, the same could not be said of Phil. All of that grease and hot sauce had caused more than a little gastric distress, along with his vow to never make another food bet with me.

At least not if it involved Jack In The Box tacos.