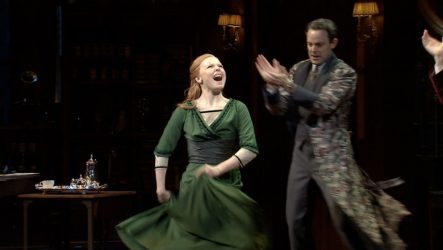 Over Christmas weekend, my wife and I went to New York to visit our daughter and see three Broadway shows, all of them from material we were already well-versed in, yet excited to see in new productions.

First up was “My Fair Lady” at Lincoln Center. The Lerner and Loewe musical became instantly iconic when it debuted in 1956 starring Julie Andrews and Rex Harrison, running a remarkable six years. It had been revived three times on Broadway, not to mention all the productions in regional theaters, colleges, high schools, and back yards — but it hadn’t returned to New York for almost a quarter century until August, when it opened with Lauren Ambrose as Eliza Doolittle. She has since left the cast and been replaced by Laura Benanti, who you might have seen doing a perfect Melania Trump impression on Stephen Colbert’s show.

We were disappointed to see that both Benanti and her leading man, Harry Hadden-Patton (Henry Higgins), were off the night we were there, but understudy Kerstin Anderson has taken the lead at every Tuesday performance, so she’s more than capable of playing Eliza, and Michael Halling is just as good as Professor Higgins. The show also stars Norbert Leo Butz who — as Eliza’s father Alfie — puts more zest into the showstopper “I’m Getting Married In The Morning” than I’ve ever seen. Rosemary Harris also deserves notice for playing Henry’s mother with a wry smile throughout.

Although I’ve seen the show and movie several times, I hadn’t realized how repetitive Alan Jay Lerner’s lyrics were (“I Could Have Danced All Night” is essentially the same verse and chorus repeated three times). Still, when they’re this familiar and performed with a cast this talented, they still resound. I was happy to see a full orchestra in the pit, rather than a six-person band using synthesizers to play the string and horn parts. With something like two dozen professional musicians at work, the sound is appropriately lush and full.

Everything about this beautiful production was top notch, including a masterful set design — particularly Higgins’ home, rotating to show us different rooms as the characters moved from one to another through doorways, plus a spiral staircase in the middle.

“My Fair Lady” still works, even at a time when we’re more sensitive to abusive men and their female victims. It would be wrong to re-tool a show that takes place decades ago to reflect modern mores, but there did seem to be a different feeling in the theater while watching the story unfold, and I was glad to see that its current creative team added a denouement that Lerner and Loewe never envisioned.