Theater Review: “What The Constitution Means To Me” 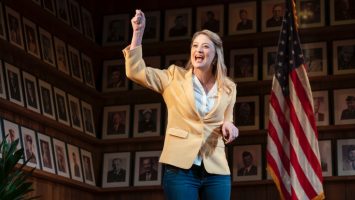 As a teenager, Heidi Schreck competed in American Legion debates, winning enough cash to put herself through college.  Decades later, she’s using those experiences as the basis for her show, “What The Constitution Means To Me,” which just won an Obie Award for Best New American Play and the New York Drama Critics’ Circle Award. It was a finalist for this year’s Pulitzer Prize for Drama, too. It has moved from Off-Broadway to Broadway, where it’s now up for two Tony Awards. That’s where I saw it a few nights ago.

The show is mostly a monologue by Schreck about how the founders ignored women (and others) when writing the US Constitution, and about efforts — through amendments and court cases — to rectify those omissions. She begins by reproducing her original teenage arguments, then moves on to other matters that are still pressing today.

Schreck is not just a terrific playwright, but a formidable performer, as well. She mixes humor in with the serious to appeal to a modern audience, and manages to make it look like she’s ad-libbing portions, while getting choked up and emotional at others.

It was at those points that I was reminded of a story Mel Tormé once told about Judy Garland. He had gone to see one of her concerts in New York and, at one point, noticed that she had become so moved by a story she was telling that she’d teared up and had to catch her breath. Afterwards, Tormé went backstage to congratulate her on how great she’d been, especially in that moment, and how he was going to come back the next night to see her again. Garland looked him straight in the eye and said something like, “Please don’t, Mel.” He asked, “Why not, Judy?” She replied, “Because if you do, you’ll see me tear up exactly the same way in exactly the same place.” What he had thought was an impromptu display of unrestrained emotion was, in fact, a rehearsed, regular part of her performance. He nodded, smiled, and said, “Well, you did it brilliantly.”

Schreck does the same thing, particularly when talking about her decision to get an abortion when she was young, or when discussing her great-great-grandmother — a mail-order bride who was bought for $75 and died at 36 of “melancholia.” That’s not a knock on Schreck, by any means. She has no doubt done those portions of the script hundreds of times, even changed them through multiple versions, yet she’s still able to present it as if it’s a new thought that’s just occurred to her. That’s the mark of a talented stage actor.

Two other people join Schreck onstage during “What The Constitution Means To Me.” One is Mike Iveson, who plays the sour-pussed American Legion official overseeing the debate and later revealing some personal things about himself. The other is a high-school student (freshman Rosedely Ciprian and senior Thursday Wiliams alternate performances) who comes out to debate Schreck about constitutional issues. The night we were there, Ciprian had just the right amount of humor and intelligence as she bantered with Schreck, both during the debate sequences and while answering questions left on index cards by the previous night’s audience.

The whole thing works because Schreck is so solid as a polemicist, a feminist, a playwright, and an on-stage presence. At a time when our Constitution is being re-imagined yet again (for the worse), she has given us her own living, breathing document as a statement on not just our times, but our history.