There Goes Your Argument 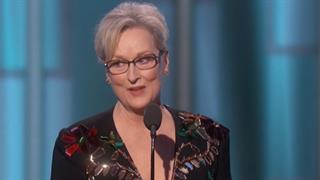 Republicans dismissing Meryl Streep’s speech at the Golden Globes because she’s a wealthy Hollywood celebrity is absolute hypocrisy from the party that elected a wealthy former reality star to the highest office in the land.

Even if you argue that Trump’s a businessman, not a celebrity, remember that the GOP is the same party that put actor Ronald Reagan in the White House, actor Arnold Schwarzenegger in the state house, singer Sonny Bono in the mayor’s office, and actor Fred Grandy in Congress. Not to mention having that poor Hollywood unknown Clint Eastwood take the stage at the 2012 Republican convention to try to diss President Obama by having a nonsensical conversation with an empty chair.

Does no one in Trumpland own a mirror or know the definition of irony?