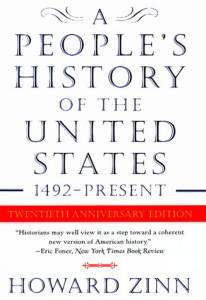 Right-wingers in the Arkansas legislature want to ban Howard Zinn’s landmark book, “A People’s History Of The United States,” from the state’s schools.

I’d bet that most of them have not read the book, but ignorance never stops the intolerant from keeping others from being educated. After all, the more knowledge the public has, the less likely they are to fall for extremist agendas like those found in too many statehouses.

Take a look at the American Library Association’s list of the most frequently banned books from a few years ago, and you’ll see titles like “Harry Potter,” “To Kill A Mockingbird,” “Catcher In The Rye,” “The Color Purple,” and “Slaughterhouse Five.” We’d be better off if we had laws that make banning any book illegal.

Meanwhile, the nonprofit Zinn Education Project is offering free copies to teachers, and so far over 600 have ordered one!