This Is A No Ad Zone 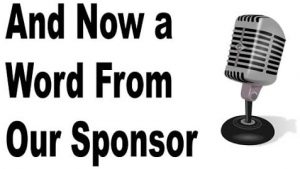 You may have noticed you never see ads on this site.

Many years ago, I tried using the Google service AdSense, which populates sites with advertising relevant to their content. The problem was that every time I wrote about con artists who claim to be psychics, AdSense would push ads for psychics onto these pages. It happened with other subjects, too. Since the income from those ads made no difference in my lifestyle, I delete the AdSense code and never looked for a replacement.

After I retired from radio, I had lots of fans telling me I should start a podcast. I explained that, after 40 years, I’d gotten used to getting paid handsomely for speaking into a microphone. They replied that all I had to do was line up some sponsors.

This reminded me of when my father was writing nonfiction books for young adults. Every so often, someone would hear he was a published author and tell him, “I have a great idea for a book. All you have to do is write it!” My father never said it, but he was thinking, “Well, sure, you’ve done all the heavy lifting. Now I’ll spend a year fleshing it out so someone might want to read it!” Dad never had a shortage of subjects he wanted to write about, so he didn’t need their ideas.

When it came to the sponsor suggestions, people told me to simply contact the companies that advertised on my radio shows, and they’d surely write me checks to support my podcast. The problem was that I never had any direct business dealings with the companies I did commercials for. A rep from the radio station made the connection and I got a little money for reading the spots live on the air, but that was it. Aside from an introductory lunch the salesperson set up with the sponsor, I never had any personal connection to them.

I do remember one lunch I attended with a car dealer who, in trying to convince me I should be his spokesman because he was a good guy, said, “I’m honest with my customers. I never try to Jew them down on trade-ins.” The salesperson could tell by the look on my face that this meeting was over, so he made some excuse to end it and I got the hell out of there. The rep found me later and apologized.

Speaking of car dealer advertisers, I wrote a piece in 2015 about an incident involving in the earliest days of my radio career that left a sour taste in my mouth. You can read it here.

There are radio personalities (e.g. Frank O. Pinion, Dave Glover, and the king of them all, Paul Harvey) who developed close relationships with sponsors, with both sides profiting from it greatly. But I was always far more concerned with the content of my show and couldn’t have cared less about the commercials which ran during it. I had no desire in those days to go out and drum up business, and even less today.

I think about this every time I listen to a podcast and hear the host(s) reading commercials. Some of them make it sound like they actually use the products and endorse them, while others just get through the copy and on with the show. Most of those ads are national buys made across a slew of podcasts which operate under the umbrella of a podcast aggregator/distributor which has its own team of reps — just like radio stations.

All of that said, I haven’t sworn off appearing on podcasts. I have guested on plenty of shows since my retirement and will happily do so again, never expecting to be paid for my time and talent. But doing my own on a regular basis? Not gonna happen. Meanwhile, I have a platform on which to freely express myself — you’re reading it right now — without ever having to answer to anyone or finding someone to subsidize it.

By the way, remember those people who advised me to go out and find sponsors? I told every one of them that, if it was so easy, they should do the selling and I’d split the profits with them 50/50.

They never brought it up again.