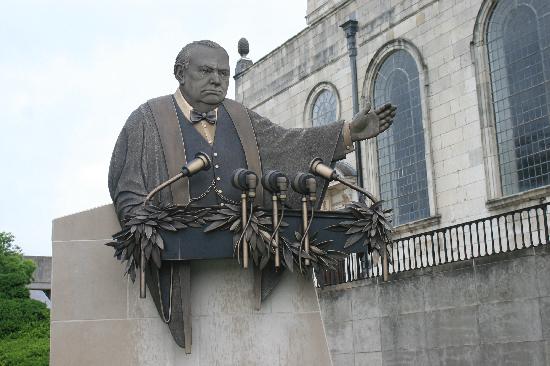 With the movie “Darkest Hour,” opening today in St. Louis (with a remarkable performance by Gary Oldman as Winston Churchill), I called upon Tim Riley, chief curator of the National Churchill Museum, to discuss the man’s legacy. He explained why the museum is in Fulton, Missouri, and the back story of the historic church that was moved there, brick by brick, from London, England.

Tim explained Churchill’s leadership in fighting Germany during World War II, how he inspired his countrymen, and how he differed from his predecessor, Neville Chamberlain. We talked about Churchill’s relationships with US president Franklin Roosevelt, and why the latter didn’t come to Britain’s aide as the Dunkirk story was unfolding in May, 1940. We also discussed a low point in Churchill’s career, when he opposed the Indian independence movement and wanted to crush its leader, Mahatma Ghandi. We even had time to get into World War I, Gallipoli, the Korean War, and Joseph Stalin.