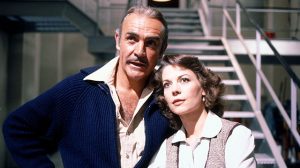 Jonathan O’Callaghan wrote a story in the science section of the NY Times that began:

If all goes to plan, in September, 2022, a NASA spacecraft, the Double Asteroid Redirection Test mission or DART, will slam into a space rock with the equivalent energy of three tons of TNT. The goal is to nudge the orbit of its target object ever-so-slightly, a practice run to see if we could divert an asteroid from a catastrophic impact with our planet in the future.

The impact on that asteroid could produce the first meteor shower ever to result from human activities in space, according to a paper published earlier this year in The Planetary Science Journal. Observing the shower could let scientists on Earth study the composition of near-Earth asteroids. But this cloud of debris would also mark a small irony for a space mission that has a goal of helping to protect our planet.

If there isn’t a screenwriter in Hollywood who sees a movie opportunity here, I’d be shocked. It’s an easy premise. NASA sends up the DART, but instead of knocking the asteroid into an orbit that would ensure it misses Earth, it instead puts the asteroid — or maybe just a huge chunk of it — on a trajectory to slam directly into one of our largest cities, where it would certainly kill tens of millions.

Actually, Hollywood has already made a movie about a space rock headed for Earth. It was called “Meteor,” a 1979 bomb directed by Ronald Neame, about an object five miles across and zooming our way at 30,000 miles an hour. Like other big disaster movies of the seventies (“The Towering Inferno,” “The Poseidon Adventure,” “Earthquake”), “Meteor” had an all-star cast that included Sean Connery, Natalie Wood, Karl Malden, Brian Keith, Martin Landau, Trevor Howard, Joseph Campanella, Richard Dysart, and Henry Fonda. Wood and Keith played Soviet scientists with the kind of bad Russian accents that probably influenced Connery’s years later in “The Hunt For Red October.”

The plot to save the planet involved using nuclear missiles that both the US and USSR had in orbit. They were each pointed at the enemy, but with some Cold War-era cooperation expressed through ridiculous dialogue, the warheads were turned around so they could fire simultaneously at the meteor. As blatantly inauthentic as the script was, the special effects were even worse, particularly compared to “Star Wars” and “Close Encounters Of The Third Kind,” which had both been released recently.

On “Sneak Previews,” Roger Ebert said “Meteor” was, “without any question, the most hilariously incompetent disaster movie I’ve ever seen.”

Though Hollywood later made the similarly-themed “Deep Impact” and “Armageddon” in the same year (1998), there’s an entire generation of Americans who haven’t seen a big-budget, all-star piece of Hollywood cheese, so it’s probably about time to reboot the concept. I bet Beanie Feldstein and Taron Egerton can pull off a bad Russian accent without breaking a sweat.

That would get you back into a movie theater, wouldn’t it?