Tired Of Winning Yet? 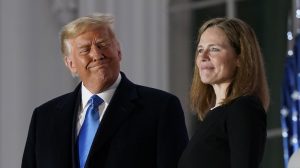 Remember when Trump acted as if naming Amy Coney Barrett to the Supreme Court would give him such an overwhelming conservative majority that she and the other Justices would ensure that he remains president for another term? Turn out, not so much, after the SCOTUS decision yesterday denying his attorneys’ request to stop certification of the Pennsylvania election results. Not a single Justice dissented.

Of course, nothing stops the Trump cultists from their quest for the grail. Upon hearing the court had rebuffed the effort, Jenna Ellis — who, along with Rudy Giuliani, not only leads Trump’s continually-failing legal team, but also has tested positive for COVID-19 — was overheard claiming, “It’s only a flesh wound,” a la Monty Python’s limbless knight.

I’ve lost count, but I think this makes a thousand times Trump has lost in courts across the country. He’s like a pouty Little Leaguer who’s thrown out on a routine ground ball but refuses to get off first base and return to the dugout so the game can continue. We’ll have to wait until January 20th for that, I suppose.

Meanwhile, there’s no adult in the GOP willing to tell the Whiner-In-Chief that if he keeps acting this way, they won’t stop on the way home to get his usual giant bucket of fried chicken at KFC.

Or maybe Trump will evacuate the White House later this month to shoot his holiday special for Newsmax, “A Grifter’s Christmas At Mar-A-Lago,” and simply never return. What a shame he and Melania wouldn’t be able to use her newly-finished tennis pavilion on the White House grounds for a doubles match against Ted Cruz and Lindsey Graham.

But the absence of all things Trump would give the White House maintenance people a chance to do an anti-COVID deep clean of the Oval Office and West Wing in preparation for the Biden team’s arrival. I’d suggest soaking the residence’s TV remotes in some sort of bleach bath, not to mention burning the bed sheets.