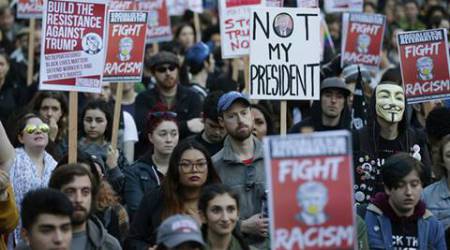 Last night in several American cities, thousands of people took to the street to protest Donald Trump being elected president. To what end? What are they hoping to accomplish?

If this was just an exercise in blowing off steam while getting together with other pissed-off Americans, okay, but the election results will not change. While there’s nothing wrong with peaceful assembly to air your grievances (in fact, the right to do so is enshrined in the First Amendment), you can’t change the fact that Trump gathered more electoral college delegates than Clinton did. He’s going to be our 45th President, no matter how many nights you march.

I also wonder how many of those in the streets last night didn’t even bother to vote. If you’re one of them, you have no one to blame but yourself. As for those who turned their anger into vandalism or violence, you’re doing nothing to help your cause.

Remember how horrified you were when That Guy You Hate said he might not accept the outcome of the election? Do you own a mirror?

Your street theater reminds me of the protestors — on both sides — who show up outside the Supreme Court whenever there’s a big decision to be made (Obergefell v. Hodges, Roe v. Wade, etc.). They shout and make speeches and carry signs, but they have no impact on the justices’ decisions. All they’re doing is creating a spectacle for the TV cameras.

Ask yourself how you’d have felt if McCain supporters had protested en masse outside Obama’s home the night after his historic election in 2008. How did you feel when you saw Obama haters wearing shirts and carrying signs saying, “Not My President”? True, many Americans — including Trump — have denied Obama’s legitimacy as president for the last eight years, but if you denounced that, you shouldn’t be using the same tactics against the man who will replace him.

That would be like Democrats in the Senate now turning into obstructionists and acting like Mitch McConnell by declaring that you’ll never work with the opposition to get anything done and pledging to filibuster every bill that comes through Congress. If you detested your opponents for not doing their constitutional duty, you’ll look nothing less than hypocritical when you do the same.

Instead of taking to the street, upset Americans need to figure out how to fix the problem, and that amounts to one simple bottom line: get more people to vote for your candidates next time. Instead of moving to Canada, move to a swing state. Instead of complaining about voter suppression, spend the next four years getting more people registered to vote instead of waiting until the last minute. Find another candidate who will get women, African-Americans, and Latinos to choose her/him — particularly in the Congressional elections coming up in two years. Change the legislature, change the laws (or at least stop bad bills from being sent to President Trump’s desk).

Those of us who lived through the 1960s remember how valuable protest can be. Marches against the Vietnam War helped end it. The civil rights era still echoes with voices that changed America. The same can be said for the beginnings of the feminist movement and gay rights. None of those victories were easily won, but they were all fought for an attainable goal.

If last night’s protests invigorate Democrats and Independents to effect positive change through the ballot box next time, then they’re worthwhile. But if they were just a downtown temper tantrum, they help no one.