Trump Has No Power To Transfer

There’s lots of talk today about Donald Trump, at last night’s debate, refusing to say he’d accept the outcome of the election. It couldn’t matter less. It won’t change a single vote in this election. There are no undecided voters for whom that will be the tipping point (how there are still undecided voters less than three weeks before Election Day is an unanswerable question).

Much of the outrage in political and media circles is that Trump’s “I’ll keep you in suspense” answer goes against the traditional “peaceful transfer of power” following American elections. Here’s the problem with those remarks: Donald Trump has no power. The “peaceful transfer” refers to the incumbent president passing the leadership baton to the newly-elected president with class and grace by packing up, moving out, and leaving a private note behind for the successor, as George HW Bush did in 1993 when he left this letter for Bill Clinton… 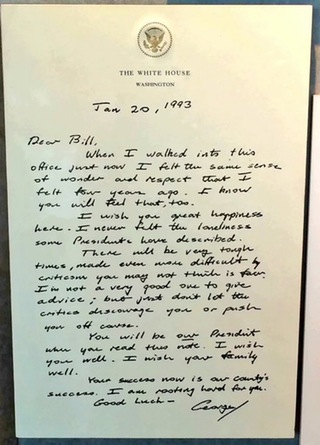 Losing something big is always tough. Coming out on the short end of a sports event like the Super Bowl, the World Series, or Wimbledon makes you feel like crap. So does being fired from a job or dumped from a relationship for someone else. You go through the Kubler-Ross five stages of grief, but your mental state affects only you — in the end, the winner wins, regardless.

That’s why it doesn’t matter whether or not Trump accepts the results of the election. He can pout and whine and complain and shout “rigged” as often as he wants and yet, on inauguration day, Hillary Clinton will be sworn in as our new president, and Trump — whether he personally gets to the acceptance stage or not — will have no say in how our country moves forward. Game over.

His only role at that point will be to watch his brand be forever tarnished while his businesses implode as lots of people (disgusted by his words and actions over the last 18 months), avoid his hotels, move out of his buildings, and don’t buy his trashy merchandise. He might continue to have a forum to spew his vitriol on “Fox and Friends,” but no one else will pay much attention to him — and that’s the absolute worst thing that can happen to a narcissist like Trump.