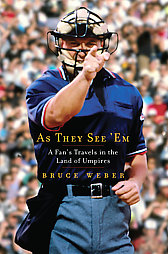 Bruce Weber went to an umpire training academy a few years ago and was fascinated by the experience and the people. Over the next three years, he spent time with umps at both the minor league and major league level, learning about their profession and listening to their stories. He has now compiled them into “As They See ‘Em: A Fan’s Travel’s In The Land Of Umpires.”

He joined me today on KIRO/Seattle to talk about the book, from why there’s no such thing as a consistent strike zone to how much a catcher can influence what an ump calls to whether umps treat baseball’s superstars differently. We disagree on the use of instant replay, as Weber is a purist who doesn’t mind using it for boundary and home run calls, but doesn’t want it used for close plays on the bases. I also asked him if, in all the stories he heard from umpires, any of them has ever reversed a call because a manager came up and yelled in his face.