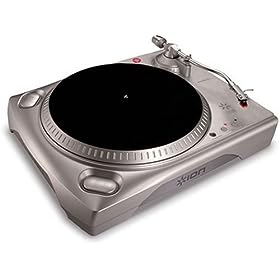 I have hundreds of old vinyl record albums sitting in my house. Although I still have a turntable hooked up to my stereo, I rarely listen to them, and wanted a way to import and digitize them so I can take them with me in my iPod, back them up to an external hard drive, etc. The stereo and my desktop PC are not in the same room, and it would have been a pain to move and connect them so, at a friend’s suggestion, I bought the Ion USB turntable.

It’s a cinch to install, with just a power cord and the USB connection into the back of the PC, and comes with the Audacity software, which enables you to do noise reduction, click removal, and other functions to clean up the pops and hisses inherent in the vinyl. The turntable has both 33 and 45rpm speeds, so you can record at the higher speed and then use Audacity to convert the data to the correct speed as a time saver.

My only gripe with Audacity is the label-and-export function, which is not as smooth as it should be. But that’s not Ion’s fault. They built a durable turntable that does what it’s supposed to do, allowing me to find a lot of music that I’d forgotten about and would probably never buy in a digital form (since I’d have to pay 99 cents a song, I figure I’ve already amortized the cost of the turntable two or three times over).