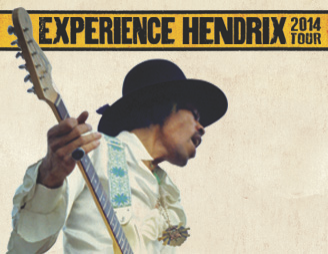 Last week, my wife and I went to the “Experience Hendrix” show at the Fox Theater. We enjoyed most of the show, which had a stellar lineup of guitar greats doing Jimi’s music, including Brad Whitford of Aerosmith, Zakk Wylde, Eric Johnson, Jonny Lang, Kenny Wayne Shepard, a couple of guys from Los Lobos, and a few others I’ve never heard of — plus the legendary Buddy Guy, who I’m happy to see perform anywhere, anytime.

It was when I saw Buddy’s name on the roster that I bought the tickets, because he’s always so damned entertaining. As the biggest star on the bill, Buddy hit the stage last, and quickly taught everyone who’d been there earlier that guitar playing is not a race. While the others felt it was imperative to prove they could play faster than anyone else, Buddy took his time, played with precision, and kept grinning as if to say, “This is how I’ve done it for 60 years, boys!”

I doubt the others learned that lesson, but the most important thing I took away from the evening is that there is such a thing as too many guitar solos. While some of the Hendrix songs were reproduced fairly faithfully (“Purple Haze,” “Angel,” “The Wind Cries Mary,” and in particular, Lang/Whitford/Wylde on “All Along The Watchtower”), there was the other extreme of Shepard doing a 20 minute version of “Voodoo Chile.” No one wants a 20-minute version of “Voodoo Chile.” If Jimi were alive — he’d be just a few years younger than Buddy — he’d tell Shepard to knock it off.

Again, we enjoyed ourselves, although we may have been the only people in the crowd of 3,000 who weren’t adding to Anheuser-Busch’s bottom line. On the other hand, I was surprised we didn’t smell any weed during the first half of the show. My wife pointed out that the Fox is a non-smoking venue, but that didn’t stop several people in our vicinity from lighting up after intermission. It’s been awhile since I’ve inhaled marijuana smoke (first- or second-hand), but this stuff smelled awful, like the cheapest weed I remember from my college days. I mentioned this to a couple of friends who still toke, and they told me that the standard now is the worse it smells, the better the buzz. From the aroma that night, several people were inhaling flaming skunk glands.

The other annoying thing was the huge number of people using their smartphones to take video of the concert. To me, the idea of paying to go to a live venue is to see the performances as they happen on the stage, not to watch them on a four-inch-wide screen. But the guy in front of me had a different philosophy, as he regularly whipped out his iPhone to shoot a minute or two of the show — he alternated between lifting the phone and downing a Bud — which meant I, too, was forced to watch the show on his phone display.

It’s been years since I went to a concert, but I remember most of them being preceded by an announcement that audio and video recording is prohibited. I suppose that’s impossible to police in the smartphone age, but if this amateur videographer actually watched the footage he shot from 30 rows away and saw how small everyone and everything looked, maybe he’d knock it off.

Nah. Not this Video Chile.