Another in my occasional series of poker stories. 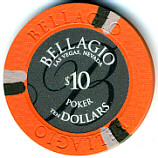 The Bellagio poker room is still one of the best places to play in Las Vegas. I just spent the weekend there, and was happy to see that they’ve opened it up a little and removed a few tables, so it’s not as cramped as it used to be. The action is always good, and I rarely had to wait more than 15-20 minutes to get a seat in a $5/10 no-limit game.

More and more poker players have moved to Vegas recently, so it’s common to sit down and find yourself among several grinders who play there all the time. But Bellagio gets a large number of poker tourists (I guess I qualify as one), and they’re the ones who feed the games — which is why those local pros show up in the first place. It can be a delicate balance finding a table with the right mix of players to make it profitable.

I was pleasantly surprised to see a lot more women playing poker this weekend. Not too long ago, I could go an entire session without a female opponent, but this weekend there was always at least one, and occasionally as many as three women at each table. That’s encouraging, and I hope that trend spreads across the country to break down the male dominance of the game (unfortunately, the WSOP Main Event is still 97% male, a figure that hasn’t changed in a decade).

One of the things I don’t like about playing at Bellagio is that cash is allowed on the table — you don’t have to convert your $100 bills into chips to play. The problem is that this makes it more difficult to know how much your opponent has in his/her stack, forcing players to constantly ask, “How much are you playing?” When it’s all in chips (as it must be in St. Louis), it’s relatively easy to look over and get a rough estimate of what you’re up against.

Bellagio also doesn’t have drink holders on its poker tables. Instead, the waitress brings your drink and places it on a napkin next to your chips. Remarkably, I haven’t seen many spills, but it’s unusual that they even risk it after all these years.

The first time I went to Bellagio, around 2001, I was still playing limit hold’em, in which you can only bet a fixed amount at any time. For instance, if the stakes are 10/20, then you can bet (or raise) ten dollars in the first two rounds of betting (pre-flop and on the flop) and twenty dollars on the next two (turn and river). In those days, Bellagio ran a 9/18 game, which seemed like odd amounts. I asked a supervisor why they didn’t just make it 10/20 and he explained that the players liked to see massive pots of blue $1 chips. I looked over at the game, and he was right, the pots looked huge. If they played it at 10/20 with red $5 chips or orange $10 chips, the pots would be mathematically bigger, but the perception would be that they were smaller and thus less fun.

In those days, I played in the 20/40 limit hold’em games in St. Louis, which became famous as some of the best in the country. There were always three or four tables, with a waiting list, and lots of action. As most people do when they travel to Vegas, I wanted to play a little higher than normal, so I got a seat in a 30/60 game.

This wasn’t even close to the biggest game spread at Bellagio. In the high-limit area, there were a couple of 60/120 limit hold’em games in progress, as well as some higher-limit stud and Omaha games. Meanwhile, a group of top pros, including Doyle Brunson, Chip Reese, Jennifer Harman, and others, were playing a 400/800 mixed game (a combination of various stud, draw, and hold’em variations) in Bobby’s Room, the special area set aside for high-stakes games. In 2014, the stakes in that room go much higher — it’s not unusual when some deep-pocket player comes to town for the pros to play at the nosebleed stakes of 2000/4000.

That night, I asked a Bellagio dealer whether they all got to deal in Bobby’s Room or it was limited to a select few. She explained that those tables were on a rotation just like all the others, but that most dealers didn’t like working in there because the high-stakes pros, with hundreds of thousands of dollars in front of them, were miserable tippers. She also explained that the players often had proposition bets going on every hand, which sometimes involved their hole cards, which they’d insist on holding onto even after they’d folded the hand. That could make it tough to keep track of who was in and who was out, not to mention the fact that there would often be $10,000 chips flying back and forth to pay off those side bets that had nothing to do with the main pot. All in all, she said, dealers would rather work a lower-limit game where the players are having fun and tipping generously.

I had a good few hours and was up quite a bit in the 30/60 game, so I figured I’d take a shot at the next step up the ladder. I wandered over to put my name on the 60/120 list, which already has seven or eight players waiting ahead of me. I never got the chance that Friday night, but I came back the next day and had another good session in the 30/60 game, and again went over to add my name to the 60/120 list. But the supervisor told me he couldn’t do that, because on Saturdays, they played 80/160. That was too high for me, and I knew it. Stepping up to 30/60 wasn’t much of a stretch, but I didn’t have the bankroll for 80/160.

Similarly, this weekend I thought about stepping up to the 10/20 no-limit game, but when I went to check it out, they were playing 10/20/40 no-limit, a markedly bigger game, and I noticed a bunch of really good players sitting at the table. One of them was Jeremy Ausmus, who won $2.1 million when he finished 5th in the 2012 WSOP Main Event, not to mention several hundred thousand more in other tournaments since then. Why jump into that pool of sharks, when the water was fine where I already was?

So, as I did in 2001, I stuck with the game I was comfortable in, had a good time, didn’t spill my drink — and made sure to tip the dealers.