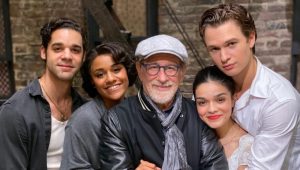 When I reviewed Steven Spielberg’s “West Side Story” in December, I gave it a 9.5 out of 10 and named it one of the best movies of 2021. Now that’s it’s streaming on Disney+, I was going to watch it again this weekend. Instead, I discovered newly-released behind-the-scenes mini-docs about various pieces of the production on YouTube. So I spent over an hour watching those and came away with an even greater appreciation of the enormous amount of work that went into producing the new interpretation of one of the greatest musicals of all time.

The segments allow a glance at Spielberg, the choreographer, the vocal coach, the production designer, the costume designer, the conductor, and many of the actors not only during filming, but rehearsing and prepping them over the course of four months, too. One example is the iconic number “America,” which joyfully tumbles out of the tenements and onto the streets. If I heard correctly, there were some 400 actors (including extras) involved in shooting just that one sequence, which practically jumps off the screen.

YouTube won’t allow me to embed it here, but you can watch it at this link. Then you can find the rest of the segments on this page.