What Game Is This? 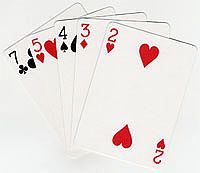 At the World Series Of Poker, Christian Pham thought he was signing up for a $1,500 no-limit hold’em event. However, because he told the cashier the wrong number for the tournament, he was registered for the $1,500 event in deuce-to-seven single-draw — a game he’d never played before, so he had no idea what proper strategy was. I’ll let my friend Nolan Dalla’s official report take it from there:

Unaware of the error, Pham took his seat at the beginning of the tournament and then watched in horror as cards were dealt out in a different way than he was expecting. Pham had no idea what was going on, or what to do.

“They had started dealing already, so I couldn’t do anything,” Pham explained later. “If they had not started dealing, I would have told the floorman and asked to be unregistered.”

Faced with no other alternative, Pham sat and watched. He folded most of his hands early on as he picked up more information about good starting hands and how to play. Pham proved to be a prodigal student. He paid attention to the finer details and nearly 12 hours after sitting down at a table and playing a poker game he’d never seen before, Pham ended the first day as chip leader.

“I’d played lots of poker before, but not this game,” Pham said. “I guess I learned fast.” Indeed, he did.

After Day Two, Pham was still the chip leader.

After Day Three, he was a gold bracelet winner.